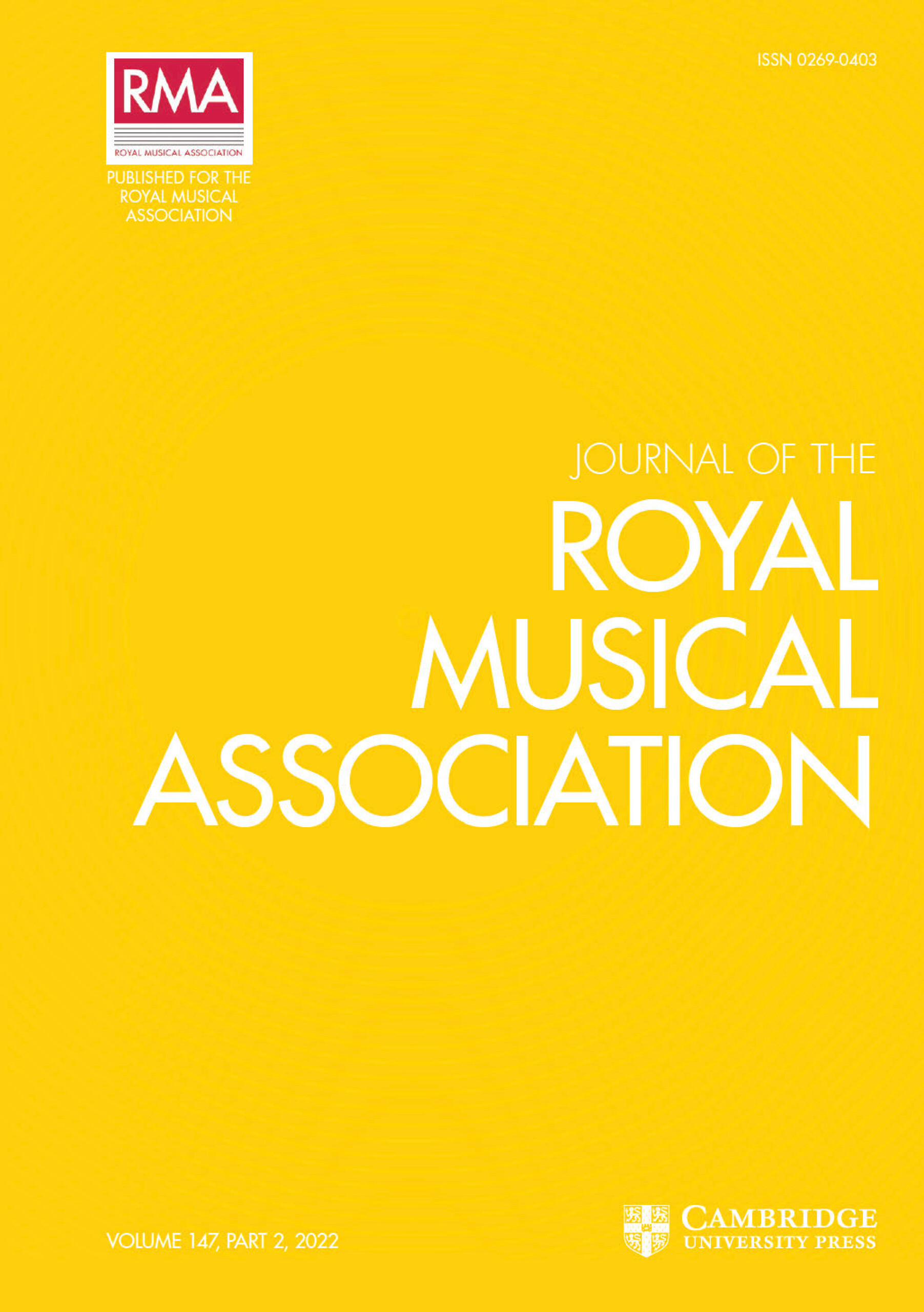 Journal of the Royal Musical Association

‘So to the wood went I’: Politicizing the Greenwood in Two Songs by John Dowland

Figurations of woods as sites of solitude, political exile and authenticity are drawn upon in a number of John Dowland's songs. ‘Can she excuse’ quotes from the ballad tune Woods so wild, while ‘O sweet woods’ makes reference to Wanstead woods, associated with both Philip Sidney and Robert Devereux during their lifetimes. This article examines how courtly experiences of political withdrawal and exile are articulated through musical and literary references to woods in these songs.

The research for this article was funded by anAHRCaward. I thank Ian Biddle, Elizabeth Eva Leach, Magnus Williamson and Richard Wistreich for their helpful comments and advice on earlier drafts. My thanks also to the anonymous JRMA readers for their constructive suggestions and to Martin Eastwell for preparing the music examples.Google Scholar

1 The Correspondence of Sir Philip Sidney and Hubert Languet, ed. and trans. Steuart A. Pears from Latin (London, 1845), 155.Google Scholar

© The Author 2007. Published by Oxford University Press on behalf of the Royal Musical Association. All rights reserved. doi:10.1093/jrma/fkm007Google Scholar

4 I thank Elizabeth Eva Leach for allowing me to see a copy of her paper ‘Grafting the Rose: Machaut, the Ars Subtilior and the Cyprus Balades’, which was given at Novacella, July 2000.Google Scholar

18 All poetic texts from lute songs by Dowland and Daniel Batcheler are given in this article as they appear in Edward Doughtie's edition of the texts. See Lyrics from English Airs, 1596–1622, ed. Edward Doughtie (Cambridge, MA, 1970). Reprinted by permission of the publisher from LYRICS FROM ENGLISH AIRS, 1596–1622, edited by Edward Doughtie, Cambridge, Mass.: Harvard University Press, Copyright © 1970 by the President and Fellows of Harvard College (p. 72). Dowland, The First Booke of Songes or Ayres (London, 1597; 1600, 1603, 1606, 1613).Google Scholar

25 To plead my faith' was set as a lute song by Essex's secretary, the well-known lutenist Daniel Batcheler. It was published in Robert Dowland's A Musicali Banquet (London, 1610), with the added inscription The Right Honourable Robert, Earle of Essex: Earle Marshall of England'.Google Scholar

27 Reprinted by permission of the publisher from LYRICS FROM ENGLISH AIRS, 1596–1622, edited by Edward Doughtie, Cambridge, Mass.: Harvard University Press, Copyright © 1970 by the President and Fellows of Harvard College (p. 348). Batcheler, ‘To plead my faith’, in R. Dowland, A Musicali Banquet (London, 1610).Google Scholar

29 Edward Doughtie has argued that ‘since the music is in dance form, and the verse follows the irregular musical phrases so closely, it may be that the text was written to fit the previously composed tune’. Doughtie, Lyrics from English Airs, 458.Google Scholar

36 Blage Manuscript, Dublin, Trinity College, MS D.2.7, fol. 108. This source, and other textual and musical versions of Woods so wild, is cited in Goodwin, ‘“Will you go walk‘”. See also John M. Ward, who gives a list of musical sources for the melody of Woods so wild in Music for Elizabethan Lutes (Oxford, 1992), 116.Google Scholar

38 Goodwill gives musical examples of many of these sources, ‘“Will you go walk‘”, 10–11.Google Scholar

50 The Countesse of Pembrokes Arcadia written by Sir Philip Sidney Knight, Now since the First Edition augmented and ended (London, 1593). The first edition, which became known as the New Arcadia, was printed posthumously in 1590, edited by Fulke Greville, Dr Matthew Gwinne and possibly John Florio. The 1593 folio edition was published by Mary Sidney Herbert, Countess of Pembroke, and her husband's secretary, Hugh Sanford. Herbert and Sanford added missing eclogues and appended the last two books of Old Arcadia to conclude their edition. The discrepancies between the differing editions is discussed in Joel Davis, ‘Multiple Arcadias and the Literary Quarrel between Fulke Greville and the Countess of Pembroke’, Studies in Philology, 101 (2004), 401–30.Google Scholar

52 Reprinted by permission of the publisher from LYRICS FROM ENGLISH AIRS, 1596–1622, edited by Edward Doughtie, Cambridge, Mass.: Harvard University Press, Copyright © 1970 by the President and Fellows of Harvard College (pp. 103–4). Dowland, The Second Booke of Songs or Ayres (London, 1600).Google Scholar

54 On the association between desire and the ‘unattainable’ see Low, The Reinvention of Love, 22–3.Google Scholar

55 David Greer, in the new Musica Britannica edition of Dowland's Ayres for Four Voices (2000), suggests that the last crotchet of bar 9 (bar numbers as in Greer's edition) and the first two of bar 10 in the Tenor part might be reversed to read c'aa (matching the lute accompaniment) so as to alleviate both the g‘/a clash between the Tenor and Alms parts and the false relation c‘/c♯ between the Tenor and Bassus parts, but it is also possible that Dowland intended to provide this dissonant version in the four-part setting. See John Dowland: Ayres for Four Voices, ed. David Greer, Musica Britannica, 6 (London, 2000).Google Scholar

57 Dowland, Second Booke, song 18. Reprinted by permission of the publisher from LYRICS FROM ENGLISH AIRS, 1596–1622, edited by Edward Doughtie, Cambridge, Mass.: Harvard University Press, Copyright © 1970 by the President and Fellows of Harvard College (p. 109). The text of Greville's poem is also published in Fulke Greville, Certame Learned and Elegant Works of the Right Hon. Fvlke, Lord Brook, Written in his Youth, and Familiar Exercise with Sir Philip Sidney (London, 1633), 179. The themes of Greville's text are echoed in the text of ‘Amour ne pouvant vivre avec la feintise’, which was published in Jehan Planson's book of Airs mis en musique in 1587. Here, as Jeanice Brooks points out, ‘the singer claims that the cruelty and deception of the “divinités” of the court have forced Love to flee for the countryside’. The text is as follows: ‘Amour ne pouvant vivre avecques la feintise, / Quitient aux grandes cours de la divinité / S'est fait hoste des bois pour revivre en franchise / Avecques la constance et la fidélité. / Là nous allons cerchant parmy les patourelles / Dont les coeurs sont aprins d'aymer naïsvement, / Et qui ne vendent point comme font les cruelles / Un petit de plaisir pour beaucoup de tourment.’ English translation as given by Jeanice Brooks: ‘Love, no longer able to live with the deception / that reigns in the great courts of divinities, / has made himself a guest in the woods, to live again in honesty / with constancy and fidelity. / There we will go looking among the shepherdesses, / whose hearts are taught to love simply, / and who do not sell, as do those cruel ladies, / a little bit of pleasure for a lot of torment.’ Brooks, Courtly Song, 365. The similarities between the texts, and their respective settings in English and French ayres, points, perhaps, to their courtly associations, which might be understood as an integral feature of both the English ayre and the French air de cour as Brooks portrays it.Google Scholar

72 For discussion of the implications of the queen's choice see Montrose, ‘Celebration and Insinuation’, 20–1.Google Scholar

79 The use of such metaphor is not unlike a later description of Essex's career, in which Wotton writes that ‘First all his [Essex's] hopes of advancement had like to bee strangled almost in the very cradle’. Wotton, A Parallel, 3.Google Scholar

‘So to the wood went I’: Politicizing the Greenwood in Two Songs by John Dowland
×

‘So to the wood went I’: Politicizing the Greenwood in Two Songs by John Dowland
×

‘So to the wood went I’: Politicizing the Greenwood in Two Songs by John Dowland
×
×