Journal of the Society for American Music - Latest issue

Latest issue of Journal of the Society for American Music 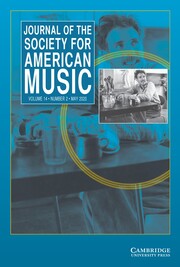