A structural relative to graphene and carbon nanotubes, graphidyne, has garnered significant attention over the past decade owing to its electrical and photocatalytic properties. A collaboration of researchers in China and the United States have now demonstrated a novel use for graphidyne, not as an energetic material, but as an antibacterial one. With evidence of antibacterial properties, graphidyne may find new applications in biomedical engineering.

Graphidyne is a two-dimensional (2D) network of interconnected benzene rings, each joined together by diacetylenic linkages (two carbon-carbon triple bonds connected by a single carbon-carbon bond). Graphene, its well-known cousin, has been used for various applications including the formation of carbon nanotubes and has recently demonstrated antibacterial activity. Comparatively, graphidyne is a newer, more flexible material that is predicted to have superior electrical, catalytic, and energy-storing properties.“[W]e envisioned that graphidyne might [also] be a superior candidate in antibacterial-related fields,” says Alideertu Dong of Inner Mongolia University.

To test the properties of this material, Dong and his colleagues formed oxidized graphidyne (GDYO) nanosheets. Oxidation is important because it allows better nanosheet dispersion in aqueous solutions and renders the material’s chemically inert surface active.

Through a series of colony counting tests involving two types of bacteria, broadly classified as gram-positive (Staphylococcus aureus) and gram-negative (Escherichia coli), the research team found that GDYO possessed time-dependent antibacterial effects which were significantly improved with exposure to light. Here, a number of interesting insights were revealed. GDYO was more effective against the gram-positive bacterial species (in which the cell walls are thick) than the gram-negative species (thin cell walls), demonstrating species-dependent efficacy. Also, compared to GDYO, graphidyne was significantly less effective against both species suggesting that chemical activation of the material’s surface is critical to its antibacterial effects. The fact that light improved GDYO’s effect is evidence of a potential photocatalytic mechanism. 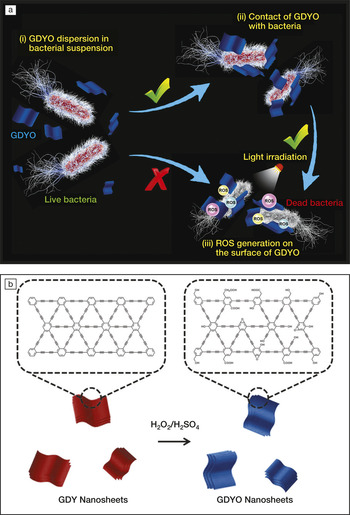 Previous characterization of graphene oxide’s (GO) effects on bacteria yielded mixed results. Multiple lines of evidence suggest that GO induces bacterial cell death through a combination of mechanical force—literally cutting into the bacteria—and oxidative stress. However, other researchers have found that GO can promote bacterial cell growth under the right conditions. Dong and his colleagues reasoned that mechanical force likely did not account for GDYO’s activity—given the difference between graphidyne’s and GDYO’s effects—and thus focused on a potential mechanism involving reactive oxygen species (ROS).

ROS are a class of highly unstable oxygen species that wreak havoc in both mammalian and bacterial cells. Damage caused by ROS can lead to deterioration of membranes, DNA strand breakage, and cell death. To counter ROS, cells are typically fortified with antioxidants that help to quench various ROS species. Dong’s team took advantage of this by incubating GDYO with bacteria in solution containing different antioxidants in order to determine if ROS could account for GDYO’s antibacterial properties and, if so, which types of ROS were responsible. Multiple types of ROS were found, but when antioxidants that specifically scavenge for singlet oxygen (a radicalized free oxygen molecule) were included, the antibacterial effect of GDYO was greatly reduced. Taken together, these data show that GDYO likely undergoes a photocatalytic conversion that leads to production of harmful singlet oxygen radicals that proceed to damage and kill bacteria.

“We think this work opens the door for GDY-based nanomaterials to be used in antibacterial and related fields, including nanomedicine and biomaterials,” Dong says.

“There is an urgent need of developing new antibacterial agents,” says Yingyu Huang, a researcher working in the laboratory of Jie Zheng at The University of Texas at Dallas. In reviewing the researchers’ report published in iScience (doi:10.1016/j.isci.2019.08.019), he says that “the authors conducted thorough experiments to elucidate the antibacterial mechanisms of [GDYO] ... which I believe will be important to the community and certainly help design even better agents in the future.”

While promising, many questions remain regarding GDYO’s true potential as an antibacterial agent. For example, Huang points out that the research team has not done extensive testing to compare GDYO to other antibacterial materials. A brief comparison of GDYO to GO shows that GO may be more potent of an antibacterial agent, but further experimentation is needed.

Nonetheless, GDYO appears to be a promising material with potential applications in biomedical engineering and beyond. According to Dong, “[GDYO] could be expanded to other fields, such as water disinfection, air purification, and antibacterial additives.”