The enamel in adult human teeth needs to be especially tough to last a lifetime. While many animals, such as sharks and crocodiles, constantly replace their teeth and rodents have continuously growing teeth, this is not the case in humans. Even bones in the human body, which are made of the same mineral as enamel, continuously remodel and regrow material over time to repair damage and stay strong. A recent publication in Nature Communications (doi:10.1038/s41467-019-12185-7) reported on how the toughness of enamel was a consequence of misorientations of its component crystals, as determined by x-ray polarization-dependent imaging contrast (PIC).

Enamel is the hardest tissue in the human body. Similar to pearl and seashells, enamel is a kind of hierarchical multiscale nanocomposite; it is made up of multiple materials brought together and structured at different scales. The primary component of enamel is a calcium mineral called hydroxyapatite (HAP). Proteins and water make up about 5% of enamel’s weight. Enamel is made up of enamel rods, which contain multiple long HAP crystals aligned with each other. “We discovered that hydroxyapatite is dichroic, that is, it shows different x-ray absorption spectra when rotating the linear polarization,” says Pupa Gilbert, head of the research group at the University of Wisconsin–Madison. 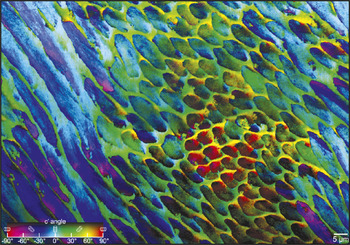 The map shows a pattern of different enamel rods crossing each other in the inner enamel of the human tooth, with three groups of rods exposed on the polished surface: in longitudinal (left), transverse (right of center), and oblique (center, right) cross sections. Credit: Nature Communications.

By using a synchrotron as an x-ray source with a photoemission electron microscope, “you can rotate the polarization and reconstruct the orientation of each crystal in a sample,” Gilbert says. She and her colleagues used her polarization-dependent imaging contrast to make maps showing the orientations of the individual HAP crystals in enamel and made an important discovery: the crystals within a single enamel rod have different orientations that differ by at least 30°, but that can go up to 90°, as determined by the orientations of the cyrstalline c-axes.

Gilbert thought these mis-orientations might have a purpose, and reached out to her colleague Markus J. Buehler, of the Department of Civil and Environmental Engineering at the Massachusetts Institute of Technology, to further explore this. Buehler’s research group carried out molecular dynamics simulations of HAP crystals under stresses similar to those involved in chewing food. The simulations showed that when the atoms are perfectly aligned across crystals, cracks easily propagate through the crystal grain boundaries. However, when the atoms in adjacent crystals are only slightly misoriented (less than 30° off), a growing crack is deflected by the boundary and stops. Smaller mis-orientation angles actually stop crack growth better than larger angles.

Cayla Stifler, a graduate student in Gilbert’s group, developed software to determine how much crystals in the teeth they imaged were misoriented relative to adjacent crystals. Gilbert says this analysis “found that the enamel in our mouth has only small misorientation angles, between 1° and 30°. Very likely we evolved to have such small misorientation angles because they are the best at deflecting cracks, so our tooth enamel breaks all the time, but only at the nanoscale, so cracks can’t travel far.”

The team is interested in looking at enamel in other animals with the polarization imaging technique to analyze their crystals’ orientations. “The greatest force our jaw can apply is about 700 Newtons, but T. Rex was capable of 60,000 Newtons. That makes me want to look at its enamel as soon as I have more beamtime,” Gilbert says. Studying orientation, along with other structural properties like the size and shape of crystals in enamel and other biominerals, could also yield new ways to design tougher biomimetic materials.