A collaboration between the groups of Professors Hailiang Wang, Gary W. Brudvig, and Victor S. Batista of Yale University has designed an ultrathin protecting layer that drastically stabilizes the performance of high energy density lithium-sulfur batteries. These results were published recently in the Proceedings of the National Academy of Sciences (doi:10.1073/pnas.1620809114).

Rechargeable lithium-sulfur batteries have significant potential for future high-energy storage applications, if their cycling stability can be improved. Existing energy-storage problems, such as electric cars or grid storage, demand battery innovation beyond the lithium-ion battery. In contrast, lithium-sulfur batteries are cheaper and promise higher energy densities. The higher energy generated by lithium-sulfur batteries makes them more unstable. Furthermore, the reactions at the sulfur cathode often produce soluble intermediates, which lead to degradation of the electrode over multiple discharge–charge cycles. “We needed a way to control [the formation of intermediates], confining them on the surface of the cathode, making the electrode more stable,” says Hailiang Wang. 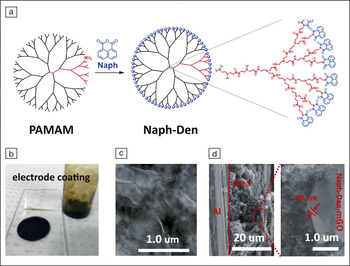 (a) Molecular structure illustration of the functionalized dendrimer. (b) Digital photo of the sulfur electrode coated with the ultrathin layer, which is a composite of the naphthalimide-functionalized dendrimer (Naph-Den) and mildly oxidized graphene (m-GO). (c) Scanning electron micrograph of the surface of the electrode. (d) Scanning electron microscope side views of the electrode, with the enlarged image showing the thickness of the composite (Naph-Den-mGO) film.

As this research demonstrates, both of these problems can be circumvented while achieving high cycle stability using an ultrathin protecting layer. The thin film comprises functionalized dendrimers, polymer-like molecular subunits, and mildly oxidized graphene. “The dendrimer acts like a glue that both anchors the dendrimer onto the graphene and, at the same time, holds onto the [soluble intermediates],” says Gao Liu, group leader of the Applied Energy Materials Group at the Lawrence Berkeley National Laboratory. The film can be made to be 100 nm in thickness, so it contributes at most 1–2% to the volume and mass of the sulfur cathode. According to Wang, “The second advantage is that this film can be readily cast onto any pre-made sulfur electrode.” The idea of improving battery performance by applying a protecting layer to an electrode is not new; other protecting layers of titanium dioxide and graphene sheets achieved cycling stabilities of 5% capacity loss over 100 cycles. The ultrathin protecting layer used in this research, which is much thinner and lighter than those used previously, led to a cycling stability of less than 1% capacity loss over 100 cycles, which is the best stability reported to date. Liu says this is a “very ingenious approach to solve the problem.”

Wang credits this success to the combined skills of the multidisciplinary team. The Brudvig group synthesized the dendrimer structure that was combined with the mildly oxidized graphene. By knowing the molecular subunit of the film, the team could identify the mechanism the film uses to trap the reaction intermediates. X-ray photoelectron spectroscopy could be matched with a density functional theory simulation of binding between these intermediates and the dendrimer structures, the latter of which was provided by the Batista group. “This is fundamentally interesting, because you want to know what is actually happening on the molecular level. That will help you to understand this better or rationally design even better structures for materials for better performance,” Wang says.