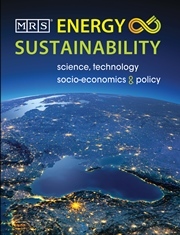 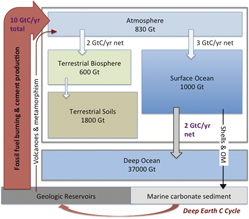 Current issues with carbon emissions need to be understood in terms of natural geologic processes that move carbon on the Earth. Comparison of modern emissions with the norms and extremes of natural processes emphasizes the enormity of the current challenge, and also the reason there are uncertainties about the future effects. Reaching sustainable emissions in the future can be viewed as a need to systematically reduce the carbon intensity of energy production.

Achieving sustainable carbon emissions requires understanding of Earth's natural carbon cycles. Geologic processes move carbon in large quantities between Earth reservoirs, including in and out of the deeper reaches of the planet, and regulate Earth's surface temperature within a narrow range suitable for life for the past 3–4 billion years. There have been large changes in atmospheric CO2 in the geologic past; the largest to offset changes in the brightness of the Sun. Atmospheric CO2 has been much higher in the past, but not since humans evolved. Geologic processes act slowly, even during times in the geologic past regarded as examples of catastrophic climate change. In contrast, over the past 100 years, Earth's carbon cycles have undergone revolutionary change as a result of a greatly accelerated transfer of carbon from geologic storage to the atmosphere. Today, about 98% of the movement of carbon out of geologic reservoirs (coal-, oil-, and gas-bearing sedimentary rocks and limestone) into the atmosphere is due to human activities; the total carbon flux is 40–50 times the geologic flux. The extremely large modern carbon flux is unprecedented in Earth history. Returning to a sustainable carbon cycle requires systematic lowering of the carbon emission intensity of energy production over the next century.