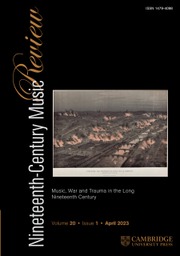 Robert, Clara and the Transformation of Poetic Irony in Schumann's Lieder: The Case of ‘Dein Angesicht’

In the last decade, musicologists have definitively put to rest the lingering concern that Robert Schumann misunderstood poetic irony in his settings of Heinrich Heine's poetry. My contribution to this project begins with Robert's written correspondence with his fiancée Clara Wieck in the years leading up to their marriage in 1840. Relying on passages in the letters that have previously received little or no critical attention, I closely observe the lovers’ views about the workings of ironic language in their relationship, especially concerning the technique that scholars of Heine's poetry have called the Stimmungsbruch (‘breaking of mood’): a sudden reversal of tone that punctures a poem's lyric beauty and maliciously invalidates its apparent sincerity. Clara detested this gesture when it came from Robert in everyday life or in his letters; she insisted that Robert share his negative feelings openly, even though Robert knew that this would distress her. The letters thus provide a helpful context in which to understand Schumann's idiosyncratic compositional treatment of the Stimmungsbruch in ‘Dein Angesicht’ (1840). Using the evidence of the letters, I argue that Heine's poem would likely have had strong personal associations for Robert and Clara. In his setting, Robert thus transformed the poem's dual Stimmungsbruch to reflect pain honestly without inflicting it at the same time. Focusing primarily on the torturous dialectic between major and minor in the song, I show how Robert has the protagonist absorb the thrust of Heine's damaging Stimmungsbruch into himself, keeping the beloved out of harm's way while still allowing the dark, throbbing energy of the wound to radiate from beneath the surface.

16 BKG, vol. 1 (1984), 239 (18 September 1838). Emphasis added. The poem is not extant, and this is the only time that the poem is mentioned in the correspondence. To my knowledge, its identity and authorship are impossible to trace, although one strong possibility is that Robert wrote it himself. Five days earlier, on Clara's birthday (13 September 1838), Robert wrote that he had ‘chosen the most delicate pages, in order to write something on them for you on this beautiful day’ (BKG, vol. 1, 236). But it is unclear whether the ‘delicate pages’ comprise the letter itself or some other document enclosed with the letter. Also, it is probable that the couple met in secret on the morning of 18 September in order for Clara to return her stash of Robert's letters before he began his travels to Vienna (see Robert's letter from 16 September, BKG, vol. 1, 237). Clara might therefore have received the poem from Robert in person earlier that day. In any event, while Robert did send his own verses to Clara on at least one documented occasion (1 December 1838, BKG, vol. 1, 312–16), it was customary for the couple to send each other verses by other authors as well. See, for example, Robert's quotation of passages from Goethe's Westöstlicher Divan in a letter from 19 April 1838 (BKG, vol. 1, 152–3) or Clara's citation from Saphir's Wilde Rosen in a letter from 12 December 1837 (BKG, vol. 1, 55–6).

22 BKG, vol. 1, 205 (14 July 1838). Clara was responding to the fanciful heading that Robert inscribed at the start of his previous letter (13 July), in which he briefly lived out the fantasy of properly revealing their secret engagement: ‘Robert Schumann and Klara Wieck present themselves anew as an engaged couple – and in this way’ (BKG, vol. 1, 199). See also Clara's comment from two days prior, BKG, vol. 1, 197 (11 July 1838): ‘I just read through your letter one more time, and I must tell you that you often really have something roguish [schalkhaft] about you; but I like nothing better than a little teasing like that from you!’

23 In this instance, Clara was responding to Robert's amusing account of how he shared some oysters that Clara had sent him with a squeamish colleague at the offices of the Neue Zeitschrift für Musik. For Robert's description of the event, see BKG, vol. 3, 958–9 (28 February 1840). For Clara's reply, see BKG, vol. 3, 968 (4 March 1840).

36 As an example of Robert's point of view, see BKG, vol. 2, 626 (10 July 1839): ‘A very evil spirit had come over me, from whom I feared that he would not leave me just as quickly …. Then clarity gradually returned, and your dear, good letter completed the convalescence: I am quite up and about again and can hardly understand why I could have had doubts. Thus I now am, and thus shall you likely find me in the future sometimes – a very elastic character that can easily become depressed but can also go up quickly into the heights again. And that's how it often is with artists. I've reproached myself because I wrote a sad letter to you in that mood. But I simply intend to conceal nothing from you.’ Clara's eventual reply from 15 July well represents her own perspective (BKG, vol. 2, 643): ‘But only tell me, my Robert, what sort of sad thoughts you have, you're always getting me scared and worried. I give thanks to my God that this frightening melancholy has passed by. You really mustn't be like this, [especially] now, when we are so close to [achieving] our beautiful goals. Your sorrowful letter got me into the greatest sadness, and yet I thank you, because you didn't conceal any of your feelings from me – your confiding in me makes me so happy.’

65 Other references to the ‘angelic’ or ‘divine’ quality of Clara's depicted or imaginary likeness are strewn throughout the correspondence. See, for example, BKG, vol. 2, 360 (‘You must look like a Madonna and a heroine at the same time’), 472 (‘I've often had the beautiful vision that you were hovering along like a guardian angel next to my carriage – I really saw you in beautiful garments, with wings and loving eyes’), 558 (‘Then everything still seems so earthbound to me and I then think “Ah, you are not worthy of this angel” – Forgive me, you my beloved Klara, that your image has made me melancholy for a moment’) and 603 (‘You must make everyone who is in your presence blissfully happy. You are such a heavenly child – my child, the beloved child of my heart are you – And what beautiful hours your image has given me; send my greetings to the painter, he has captured you nobly; that's just how a maiden like yourself looks’).

72 According to Rufus Hallmark (Genesis, 50–52), in the draft of this song Schumann used Heine's word schmerzenbleich in the reprise (bar 26), even though he had changed it earlier to schmerzenreich in bar 9. Hallmark concludes that Schumann's alteration was probably ‘an oversight … that should be corrected in modern editions’ (52), but to my mind it is equally plausible that the use of schmerzenbleich in bar 26 was in fact the oversight, especially considering that the first melodic sketch of the song also uses Schumann's word (although the sketch does not feature a reprise), and the first edition of the song (published in January 1854 in an edition supervised by Schumann, albeit 14 years later) uses Schumann's word both times.

Robert, Clara and the Transformation of Poetic Irony in Schumann's Lieder: The Case of ‘Dein Angesicht’
×

Robert, Clara and the Transformation of Poetic Irony in Schumann's Lieder: The Case of ‘Dein Angesicht’
×

Robert, Clara and the Transformation of Poetic Irony in Schumann's Lieder: The Case of ‘Dein Angesicht’
×
×