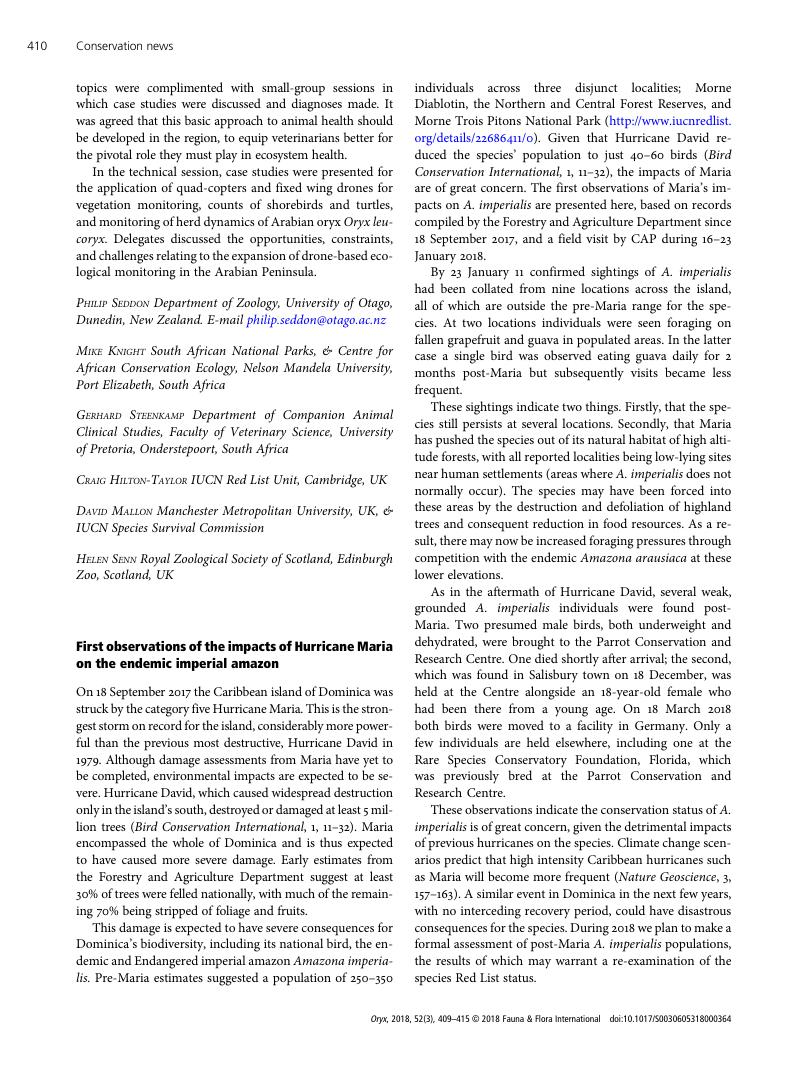 On 18 September 2017 the Caribbean island of Dominica was struck by the category five Hurricane Maria. This is the strongest storm on record for the island, considerably more powerful than the previous most destructive, Hurricane David in 1979. Although damage assessments from Maria have yet to be completed, environmental impacts are expected to be severe. Hurricane David, which caused widespread destruction only in the island's south, destroyed or damaged at least 5 million trees (Bird Conservation International, 1, 11–32). Maria encompassed the whole of Dominica and is thus expected to have caused more severe damage. Early estimates from the Forestry and Agriculture Department suggest at least 30% of trees were felled nationally, with much of the remaining 70% being stripped of foliage and fruits.

This damage is expected to have severe consequences for Dominica's biodiversity, including its national bird, the endemic and Endangered imperial amazon Amazona imperialis. Pre-Maria estimates suggested a population of 250–350 individuals across three disjunct localities; Morne Diablotin, the Northern and Central Forest Reserves, and Morne Trois Pitons National Park (http://www.iucnredlist.org/details/22686411/0). Given that Hurricane David reduced the species’ population to just 40–60 birds (Bird Conservation International, 1, 11–32), the impacts of Maria are of great concern. The first observations of Maria's impacts on A. imperialis are presented here, based on records compiled by the Forestry and Agriculture Department since 18 September 2017, and a field visit by CAP during 16–23 January 2018.

By 23 January 11 confirmed sightings of A. imperialis had been collated from nine locations across the island, all of which are outside the pre-Maria range for the species. At two locations individuals were seen foraging on fallen grapefruit and guava in populated areas. In the latter case a single bird was observed eating guava daily for 2 months post-Maria but subsequently visits became less frequent.

These sightings indicate two things. Firstly, that the species still persists at several locations. Secondly, that Maria has pushed the species out of its natural habitat of high altitude forests, with all reported localities being low-lying sites near human settlements (areas where A. imperialis does not normally occur). The species may have been forced into these areas by the destruction and defoliation of highland trees and consequent reduction in food resources. As a result, there may now be increased foraging pressures through competition with the endemic Amazona arausiaca at these lower elevations.

As in the aftermath of Hurricane David, several weak, grounded A. imperialis individuals were found post-Maria. Two presumed male birds, both underweight and dehydrated, were brought to the Parrot Conservation and Research Centre. One died shortly after arrival; the second, which was found in Salisbury town on 18 December, was held at the Centre alongside an 18-year-old female who had been there from a young age. On 18 March 2018 both birds were moved to a facility in Germany. Only a few individuals are held elsewhere, including one at the Rare Species Conservatory Foundation, Florida, which was previously bred at the Parrot Conservation and Research Centre.

These observations indicate the conservation status of A. imperialis is of great concern, given the detrimental impacts of previous hurricanes on the species. Climate change scenarios predict that high intensity Caribbean hurricanes such as Maria will become more frequent (Nature Geoscience, 3, 157–163). A similar event in Dominica in the next few years, with no interceding recovery period, could have disastrous consequences for the species. During 2018 we plan to make a formal assessment of post-Maria A. imperialis populations, the results of which may warrant a re-examination of the species Red List status.