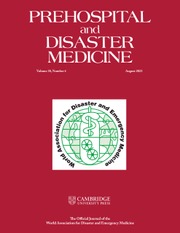 Copyright
© The Author(s), 2022. Published by Cambridge University Press on behalf of the World Association for Disaster and Emergency Medicine

With the increasing frequency and severity of extreme weather events, there is a compelling case to be made for the use of amphibious vehicles in natural as well man-made disasters and emergencies. Applications range from the supply of humanitarian logistics, water production, and in particular – mobile medical units. These could form a very efficient first response capability for prehospital and Emergency Medical Services and enable access to areas cut off by flooding, assist coastal and island communities, and negotiate natural boundaries such as rivers or where bridges have been compromised.

Current amphibious response capacity is primarily conducted by military units which is costly in the first instance and the use of uniformed personnel with military hardware can be perceived in a negative light by those in need. There is a limited period that naval and auxiliary vessels can remain on locations as these are strategic assets and will need to return to their primary roles in the country of origin. This is further compounded by the blanket refusal of some major relief nongovernmental organizations (NGOs) to work alongside any military entity. There have been cases of retired vintage amphibious vehicles for tours used in hurricane response efforts in the US but with limited effect given the age and general unreliability of the equipment.

Tortuga Amphibious Vehicles (Figure 1) aim to address this by utilizing modern, mass-produced donor chassis types, which are readily supported with spares and repair. The conversion process from donor to finished unit is also a very cost-effective approach, avoiding the need to design and build from scratch. Several types have been exported overseas to date, including two units for an evacuation center in Manila, and a number of communities have been reached with medical supplies and water that were isolated by flooding in China by the Red Cross. The response vehicles can be deployed by sea to coastal and island communities by any number of civilian vessels of opportunity to promote a rapid first response. Similarly, as capable off-road vehicles, they can penetrate any inland areas and be independent of bridges where these may have been impacted. The concept also puts a very capable amphibious response solely in civilian hands, including local personnel as operators, which would offer employment opportunities. The problem of deploying units to disaster sites can be addressed by the use of laid up offshore supply vessels, of which there is a global over-supply due to the fluctuating oil price. There are large numbers of these ships in storage around the world, crucially in areas affected by natural disasters such as Indonesia, the Caribbean, and Africa that could be re-purposed cost effectively. This has been the subject of several studies and we are in discussion with a large shipbroker in Singapore to examine this in more detail.

Advances in scaling down of medical devices in size means that a single vehicle could be very well-equipped to deal with a range of prehospital and medical emergencies. Battery powered x-ray systems along with handheld ultrasound imaging machines, to name but two examples, enable portability on and off the vehicle and would complement standard emergency medical equipment. There are now ultra-low temperature portable fridges on the market which are battery powered with solar capacity and extremely effective in maintaining cold chains. Vaccine roll-out to remote, rural communities would also be a key feature of amphibious operations and could be used to expand COVID-19 vaccination as well as conventional immunization programs that have been suspended due to the pandemic. Having the means to maintain ultra-low temperatures on board the vehicle outside of urban and peri-urban settings where distributed grid power might also be fragile could make significant advances in protection against Ebola virus and others, helping contain outbreaks.

There have been several events in the past few years where this capability would have been welcome, and this has been expressed by a number of individuals attending AidEx in Brussels, Belgium and the International Disaster Response Expo in London, UK, both in late 2018.

Large areas of the Philippines devastated by Typhoon Haiyan in 2013 could have been serviced by amphibious clinics able to reach outlying islands in need. Their deployment would have complemented helicopter operations which were extremely stretched at the time and were in any case very costly to run and maintain and there were several cases of air accidents. Water production equipment mounted to the vehicles would have been of particular benefit as solar powered reverse osmosis plant would be capable of making water from a variety of fresh, brackish, and salt sources. With correct pre-filtering, contaminated water could offer a viable feedstock.

In 2018, the island of Sulawesi in Indonesia was impacted by a tsunami with the city of Palu badly affected. The airport was forced to close as a result of a 500m crack in the runway. Port and harbor infrastructures were also damaged, and a major bridge collapsed. All of this affected the scale and speed of the response with the traditional focus on airlifts. Many of the beaches close to affected areas were ideal landing points for an amphibious vehicle, which deployed off vessels readily able to reach the area could have made a profound difference, bypassing the need for harbor and airport facilities. Hospitals were also damaged with victims having to be treated in the open or in tents and under canvas. A self-contained mobile clinic would have proved very effective and would have the means to refuel and resupply from assistance vessels offshore that were unable to dock. This would ensure continued effectiveness.

Hurricane Dorian in the Bahamas in 2019 was another example of damage to harbors and airports which hampered aid efforts. A responder who was involved was certain that having amphibious capability would have proved extremely useful transferring relief material and supplying emergency medical aid from offshore assets and also able to move with relative ease between islands.

Most recently was the case of the earthquake and subsequent tropical storm in Haiti which affected the Southwest peninsula. Relief and medical aid were focused on delivery to the capital before being trucked out, but was compromised by criminal gangs stopping convoys leaving Port au Prince. Perversely, the follow-on tropical storm washed away bridges and roads leading to the affected areas. This again would have been a strong case for the use of amphibious vehicles, which would have been able to insert medical and relief aid exactly where and when needed, with good landing points around the peninsular all close to the points of need. This would avoid having to negotiate the many obstacles that distributing efforts from the capital posed and so increase efficiency of response.

Another case, not associated with a disaster scenario, was related to us by an NGO working in Mozambique. It concerned a consignment of vaccines for a clinic in a very remote area of the country that were collected at the airport in the capital by truck. As the condition of the roads rapidly deteriorated not far from the city center, the load was then transferred to taxis able to make better progress with the conditions. This was then repeated with the use of motorbikes which were able to cope with the worst of the roads where cars were not practical. However, when faced with one of the rivers on the route, the load was again transferred to canoes and once on the opposite bank, it was a case of hand carrying the cool boxes to the end user. At each point where the load was transferred to a different mode of transport, the cold chain was put at risk as well as the coolboxes themselves which could have been lost or damaged. This could be avoided if using an amphibian fitted with reliable on-board generation and backed up by solar and battery banks as a means of redundant supply. A vehicle could receive vaccines and medicine at the point of origin, such as the airport, and then be able to travel to the point of end-use without the need to transfer the load. This would be crucial in maintaining and guaranteeing vital cold chains including ultra-low applications.

We have the support of the Humanitarian Logistics Association (Corby, Northants, UK) and are now at the point where we intend to ship a test vehicle to Thailand or Indonesia and run a series of demonstration trials for relevant interested parties. These will be used to test techniques and equipment and develop standard operating procedures along with a breakdown of running and maintenance costs during deployment. This would lead to accurately quantifying all aspects of a response of this kind, which can be shared with potential adopters to compare against standard response types and costs.

We would welcome the opportunity to collaborate with NGOs and government agencies in these trials, if possible. Advisors include a very well-respected doctor in Jakarta who has long been involved with emergency medicine in the region and is assisting with the design and layout of the clinical aspect of the vehicle, including the equipment that could be installed and carried. A large solar energy training provider in the US is happy to be involved in the design of the solar power requirements and we are investigating the potential use of hydrogen fuel cells for clean, quiet power production These are silent and do not produce emissions such as carbon monoxide, making them ideal for use in confined areas. 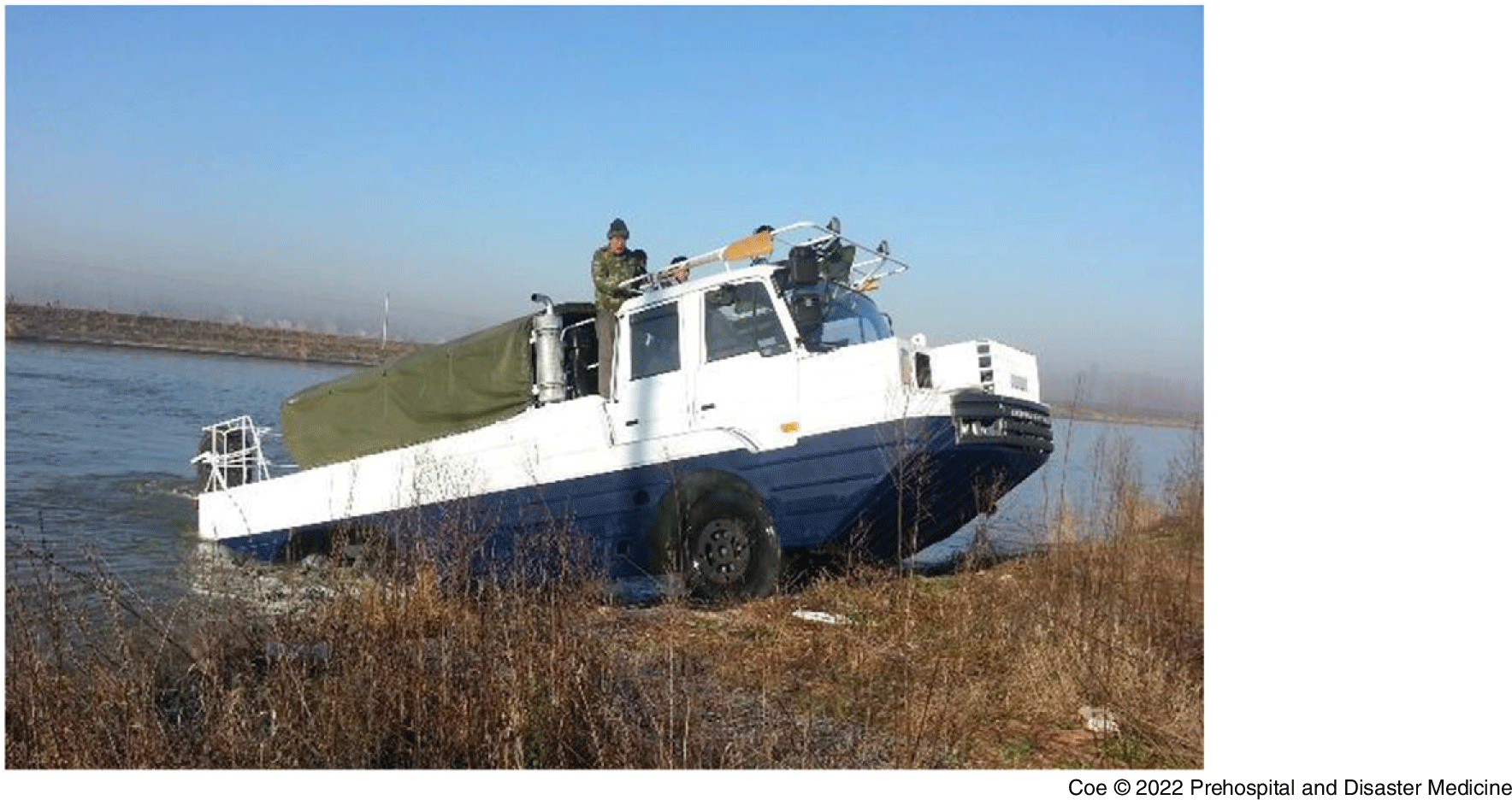 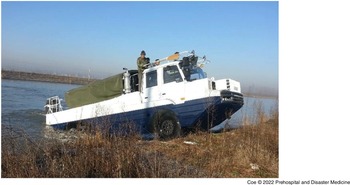