Introduction: Forecasting the 2018 US Midterm Elections

On Tuesday, November 6, 2018 about 85 million American voters (between 35% and 40% of those eligible) will elect all 435 members of the US House of Representatives and 35 members of the US Senate. The midterm election’s outcome will play a major role in policy making and the politics leading up to the presidential election of 2020. Going into the 2018 elections, Republicans hold majorities in both chambers of Congress. The articles in this special issue, with one exception (i.e., Carl E. Klarner’s forecast of state legislative elections), offer forecasts of how the 2018 midterm congressional elections are likely to change the partisan composition of the House and the Senate.

As in previous forecasting symposia, the forecasts in this collection are based on statistical analyses of how indicators of the pre-campaign context of elections have been associated historically with their outcomes. While each model draws on its own set of indicators of the election’s context, a brief overview of conditions leading into the midterm may be helpful in providing some context. What do the history of midterm elections, the number of seats each party is defending in 2018 (the arithmetic of the election), and the political climate leading up to the fall campaign—from opinions about the president and national economic conditions and policies to events ranging from Supreme Court nomination to relations with our allies and adversaries as well as the lengthy investigation into Russian “meddling” in the 2016 elections—broadly indicate about 2018 and how are these factors likely to shape the forecasts and, ultimately, the election’s outcome?

As is well known, the president’s party routinely loses House seats in midterms.Footnote 1 In the 29 midterm elections held since 1900, the presidential party lost seats in all but three (i.e., 1934, 1998, and 2002). In each of these exceptions, the sitting president was unusually popular (Bill Clinton and G.W. Bush had approval ratings over 60% and FDR’s pre-approval rating 1934 midterm fell between his 1932 and his 1936 landslide victories). In the 17 midterms held since 1950, presidential party losses averaged 24 House seats, with a median loss of 19 seats. This comports with surge and decline theories suggesting something akin to a political gravity—what goes up with short-term forces in one election comes down at the next (A. Campbell Reference Campbell1960; J. Campbell Reference Campbell1997).

While midterm losses in House seats are routine, the extent of these losses varies considerably and this variation has increased. Figure 1 plots distributions of midterm seat changes for the president’s party for the first nine midterms in the series (1950 to 1982) and the most recent eight (1986 to 2014). With more polarized politics, losses have tended to be smaller since the mid-1980s. Mean presidential party seat losses declined from 27 seats to 20. There has been a greater shift in the medians with median presidential party losses declining from 25 seats to just 10. Seat changes have not merely become more compressed, their variances have increased substantially (standard deviations increased from 17 seats to 27 seats). Polarized parties have diminished the number of easily flipped seats; but, in doing so, they have increased the number of seats gained when short-term conditions more strongly favor one party. House seat changes are in an era of feast or famine. Based on the history of seat changes, the real question is not which party will gain seats, but whether Democratic House seat gains will be small or large. 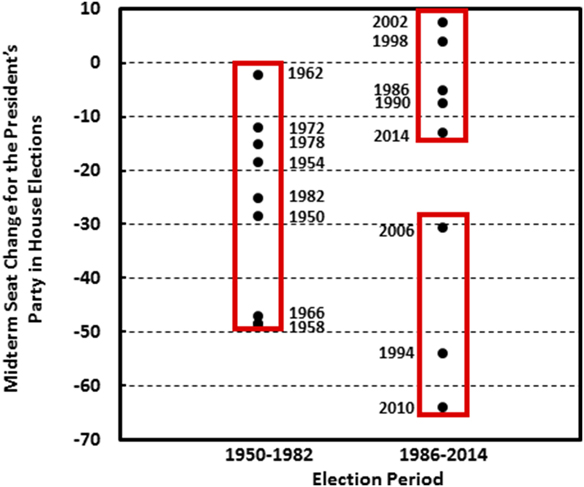 Owing to different sizes of state electorates, mixed compositions of classes of Senate seats up in different years, and the greater independence of Senate races resulting from their greater visibility and intensity, the history of presidential party performance in Senate midterms is less clear than in the House. Since 1950, the presidential party at the time of the midterm has lost Senate seats in 11 of the 17 midterms (65%). Over the same period, the party of the president winning the election six years prior, when the class of Senate seats was last elected, also lost Senate seats in 11 of the 17 midterms (Campbell Reference Campbell1997; Grofman, Brunell, and Koetzle Reference Grofman, Brunell and Koetzle1998). Because Democrats won the presidency in 2012 (Obama’s reelection) when the class of 2018 Senators was last elected and Republicans are now the presidential party, the historical record might be read as suggesting an offsetting outcome of little change.

THE CONGRESSIONAL ARITHMETIC OF 2018

Beyond the broad contours of midterm history, important components of the midterm’s context are the numbers of seats each party holds and needs to win to achieve a majority—the congressional arithmetic of 2018. At first glance, current party divisions would seem to favor Democrats in the Senate and Republicans in the House. On closer examination, however, the prospects of Democratic majorities are just the opposite: greater in the House than in the Senate. Despite their presidential candidate losing the national popular vote and losing a net six seats, Republicans won a 24 seat majority (241 Republicans to 194 Democrats) in the House in 2016. With six vacancies as of mid-August 2018, the House division was 236 Republicans and 193 Democrats. So, depending on which baseline you choose, Democrats need a pickup of 24 or 25 seats to reach a majority of 218 seats. In the 17 midterm elections since 1950, the president’s party has lost 24 seats or more roughly half the time (in 8 of 17 midterms, a 24 seat loss is also the mean presidential party midterm loss in this period). Based on this history, the 2018 midterm would appear to offer Democrats strong prospects of a majority in the House.

In the Senate, Republicans hold a slim majority (51 to 49, counting two nominal “independents” who caucus with the Democrats as Democrats). Taking into account Vice President Pence’s tie-breaking power, Democrats require only a two seat gain for majority control. This seemingly small shift, however, is a tall order. Democrats are defending many more seats than Republicans this year. Of the 35 Senate seats up, Democrats hold 26 to only nine for Republicans. This does not offer much room on the “high side” for Democrats or much room on the “low side” for Republicans. Democrats have to do well just to hold their current overall numbers.

The reason for this is found in the previous three elections for this class of Senate seats. In this Senate class’s last election in 2012, Democrats registered a small net gain (two seats), but this was in addition to their strong showings in the prior two elections for the class. In 2006, Democrats gained six seats and in 2000 they had gained five seats. Because Senate Democrats already hold the seats in states favorable to Democrats (and a few more in battleground states), they now face the far more difficult job of trying to win or hold seats in less hospitable states without losing seats they already hold in competitive states.Footnote 2 A net gain of two seats and a majority in the Senate means Democrats have to win a whopping 80% (28 of 35) of this year’s Senate elections.

The history of midterms and the arithmetic of the parties’ current standings are important starting points in evaluating how the election is likely to turn out, but contemporary political forces are also critical and shape what goes into the forecasting models (Campbell Reference Campbell1997; Tufte Reference Tufte1975). What’s the political climate surrounding the campaign?

THE POLITICAL CLIMATE OF 2018

The history of midterms and the arithmetic of the parties’ current standings are important starting points in evaluating how the election is likely to turn out, but contemporary political forces are also critical and shape what goes into the forecasting models (Campbell Reference Campbell1997; Tufte Reference Tufte1975). What’s the political climate surrounding the campaign?

Despite strong economic growth (real GDP growth of 4.1% in the second quarter), federal income tax cuts, and a low and declining unemployment rate (under 4%), the political climate leading into the midterm favors the Democrats. One important indicator of this is the president’s approval rating. In mid-August, President Trump’s approval hovers around 40% (Gallup 2018). The good news for Republicans is that then-candidate Trump’s numbers had not been high in 2016 when voters last elected a Republican House and Senate. If Republicans in Congress could survive candidate Trump in 2016, why couldn’t they survive President Trump in 2018? Moreover, President Trump’s current numbers are not much different from the first midterm ratings of several other recent presidents (aside from the Bushes whose ratings had been inflated by Desert Storm and the 9/11 terrorist attacks). The bad news for Republicans is the parties of each of the last three presidents with approval ratings around 40% (i.e., Carter, Clinton, and Obama) suffered double-digit House seat losses in their midterms and the most recent two each lost more than 50 seats (i.e., Clinton in 1994 and Obama in 2010).

Evidence of the political climate of 2018 may also be read from the decisions of representatives (Jacobson and Kernell Reference Jacobson and Kernell1981). Whether anticipating a rough year for Republicans, a desire to opt out of Trump-dominated politics or other reasons, there are more than twice as many open seats in the House currently held by Republicans (44) than by Democrats (20). In the Senate, all 26 Democratic incumbents are seeking reelection while three of the nine Republican seats are open-seat contests. Whether this is a measure of the political climate in the electorate or the political climate among establishment Republicans, it makes the preservation of Republican congressional majorities more difficult.

With a broad background of midterm history, congressional arithmetic, and the current political climate established, we can now turn to the more systematic estimates of how these factors are likely to come together in this year’s midterm. What follows are four independent congressional forecasts and one state legislative forecast that inform us about what we should expect to come out of this election. Table 1 presents a summary of these congressional forecasts. Although there are differences among them, two points are common. 2018 is likely to be a very good year for the Democrats in the House of Representatives. In fact, all four forecasts expect a Democratic House majority. In the Senate, Republicans are likely to hold their own and perhaps pick up a seat or two. So, on to the forecasts. 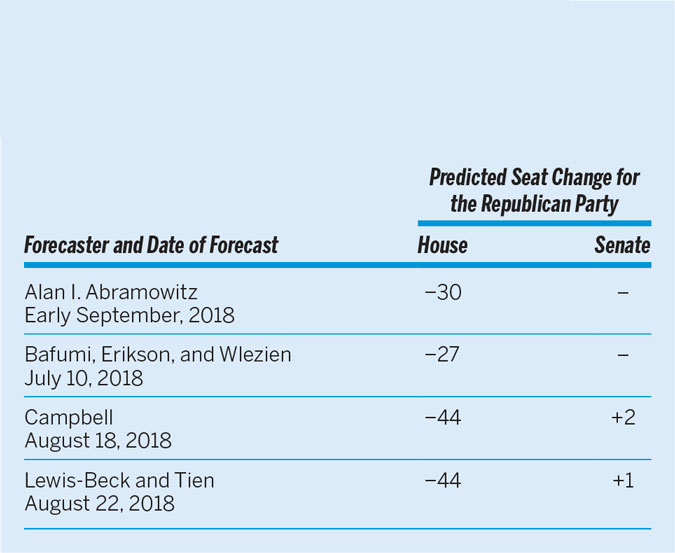 2. Ten of the Democrats’ Senate incumbents are in states carried by President Trump in the 2016 election. These include battleground states like Florida, Ohio, Pennsylvania, and Missouri, but also several states normally considered Republican leaning. These include Indiana, North Dakota, and West Virginia.