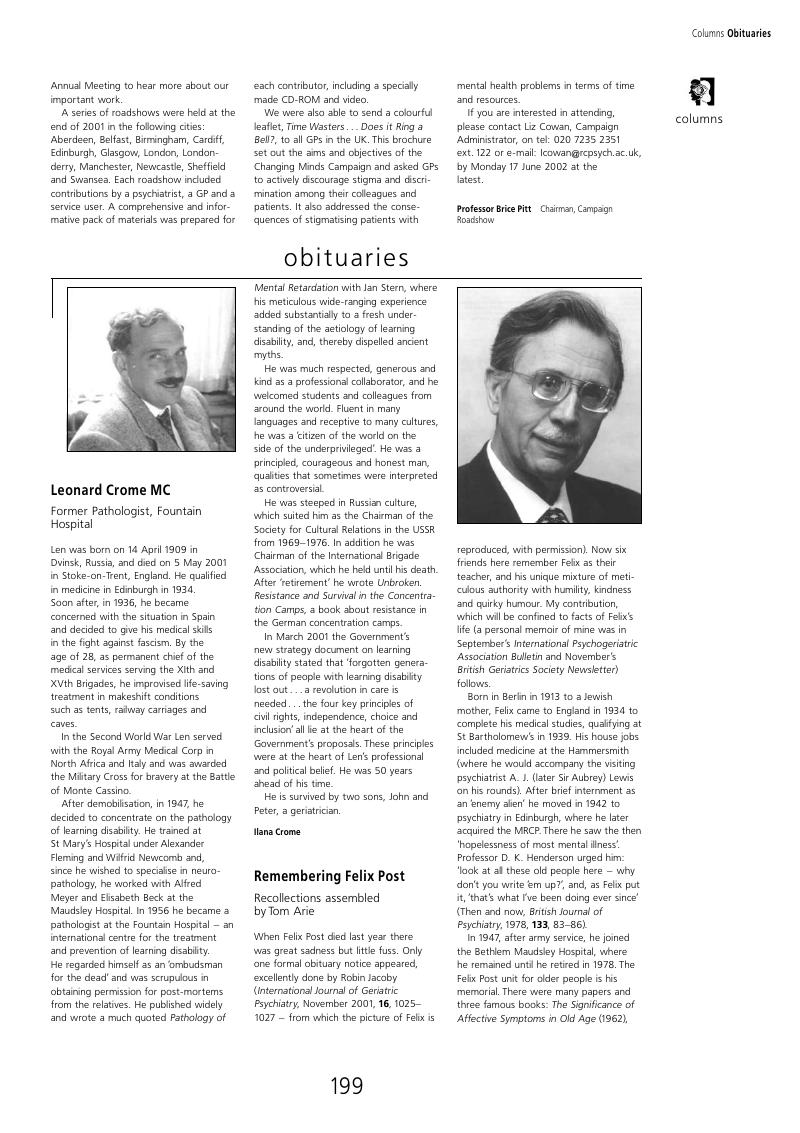 An abstract is not available for this content so a preview has been provided. To view the full text please use the links above to select your preferred format.
Type
Obituaries
Information
Psychiatric Bulletin , Volume 26 , Issue 5 , May 2002 , pp. 199 - 200
DOI: https://doi.org/10.1192/pb.26.5.199-a[Opens in a new window]
Creative Commons
This is an Open Access article, distributed under the terms of the Creative Commons Attribution (CC-BY) license (http://creativecommons.org/licenses/by/4.0/), which permits unrestricted re-use, distribution, and reproduction in any medium, provided the original work is properly cited.
Copyright
Copyright © Royal College of Psychiatrists, 2002

When Felix Post died last year there was great sadness but little fuss. Only one formal obituary notice appeared, excellently done by Robin Jacoby (International Journal of Geriatric Psychiatry, November 2001, 16, 1025-1027 — from which the picture of Felix is reproduced, with permission). Now six friends here remember Felix as their teacher, and his unique mixture of meticulous authority with humility, kindness and quirky humour. My contribution, which will be confined to facts of Felix's life (a personal memoir of mine was in September's International Psychogeriatric Association Bulletin and November's British Geriatrics Society Newsletter) follows. 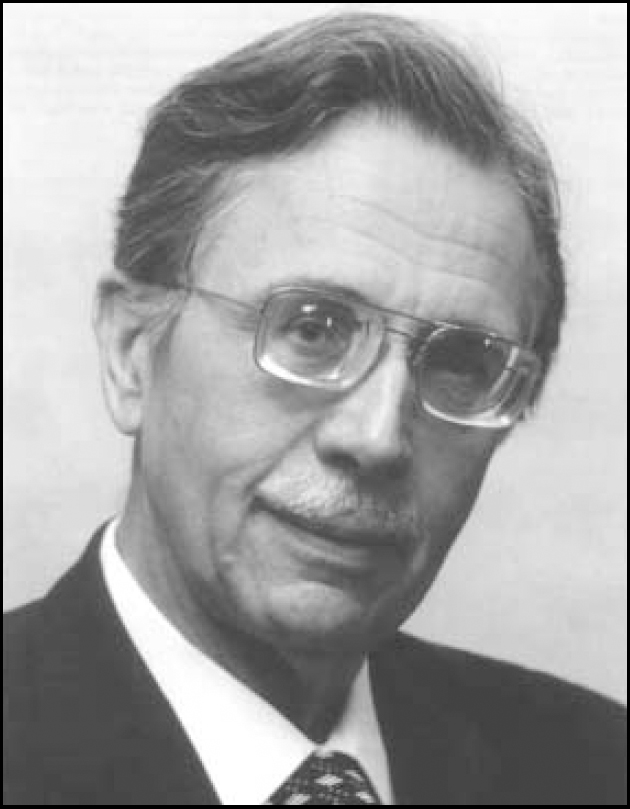 Born in Berlin in 1913 to a Jewish mother, Felix came to England in 1934 to complete his medical studies, qualifying at St Bartholomew's in 1939. His house jobs included medicine at the Hammersmith (where he would accompany the visiting psychiatrist A. J. (later Sir Aubrey) Lewis on his rounds). After brief internment as an ‘enemy alien’ he moved in 1942 to psychiatry in Edinburgh, where he later acquired the MRCP. There he saw the then ‘hopelessness of most mental illness’. Professor D. K. Henderson urged him: ‘look at all these old people here — why don’t you write ‘em up?’, and, as Felix put it, ‘that's what I've been doing ever since’ (Then and now, British Journal of Psychiatry, 1978, 133, 83-86).

In 1947, after army service, he joined the Bethlem Maudsley Hospital, where he remained until he retired in 1978. The Felix Post unit for older people is his memorial. There were many papers and three famous books: The Significance of Affective Symptoms in Old Age (1962), The Clinical Psychiatry of Late Life (1965) and Persistent Persecutory States of the Elderly (1966).

Felix was the first chairman of the psychogeriatricians in the College. He tackled that role with enthusiasm, even though the main thrust then was service development rather than clinical research. In 1969-1970 he was President of the Psychiatry Section of the Royal Society of Medicine. Our College made him an Honorary Fellow. Despite efforts of friends (which he would have deplored) he received no public honours.

Felix died suddenly in February 2001. His first wife had died in 1961. His devoted second wife, Kathleen, and son and daughter of his first marriage survive him.

His influence was huge, and he was much loved.

From a Family member with gratitude

09 February 2006
Miss RE Post, student
Dear Sir, Let me introduce myself, my name is Rebecca Post grandaughter of the late Felix Post. My father is Antony Julian Post. I was very pleased to read this article as it is a very detailed and thoughful tribute to my grandfather. Regretfully I never really got to know him well as we did not visit him frequently at his Wimbledon home. I can remember that he was a very reserved, thoughful... More
Conflict of interest: None Declared
Write a reply