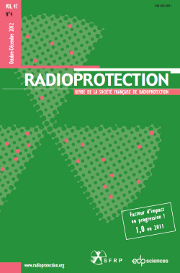 The natural radioactivity in vicinity of the brown coal mine Tusnica – Livno, BiH

Coal mine Tusnica is located in South-West part of Bosnia and Herzegovina in the municipality Livno. Coal mine Tusnica consists of two surface coal mines. The first one is brown coal surface deposit called Drage and second one is lignite deposit called Table. The brown coal deposit shows increased levels of natural radionuclides. The highest absorbed dose rate is recorded in the center of the surface coal mine Tusnica-Drage (500 nGy h-1) as result of the increased content of uranium and radium in coal (average specific activity of U-238 is 623 ± 23 Bq kg-1 and Ra-226 is 1191 ± 5 Bq kg-1). Levels of natural radionuclides in the vicinity of the surface deposit Drage in agricultural soil (about 3 km of the centre mine) are slightly increased due to the use of the coal ash and coal dust for fertilization of the land (U-238 is 142 ± 11 Bq kg-1 and Ra-226 is 197 ± 2 Bq kg-1). Obtained results in soil-plant-animal products chain does not show significantly increased levels of natural radionuclides due to the fact that mentioned radionuclides, in general, have a low transfer factors in soil-plant-animal products chain.

The natural radioactivity in vicinity of the brown coal mine Tusnica – Livno, BiH
×

The natural radioactivity in vicinity of the brown coal mine Tusnica – Livno, BiH
×

The natural radioactivity in vicinity of the brown coal mine Tusnica – Livno, BiH
×
×