Science, Technology, Medicine – and the State: The Science-State Nexus in Scandinavia, 1850–1980 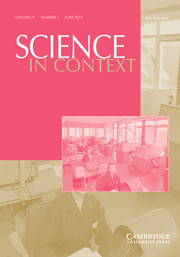