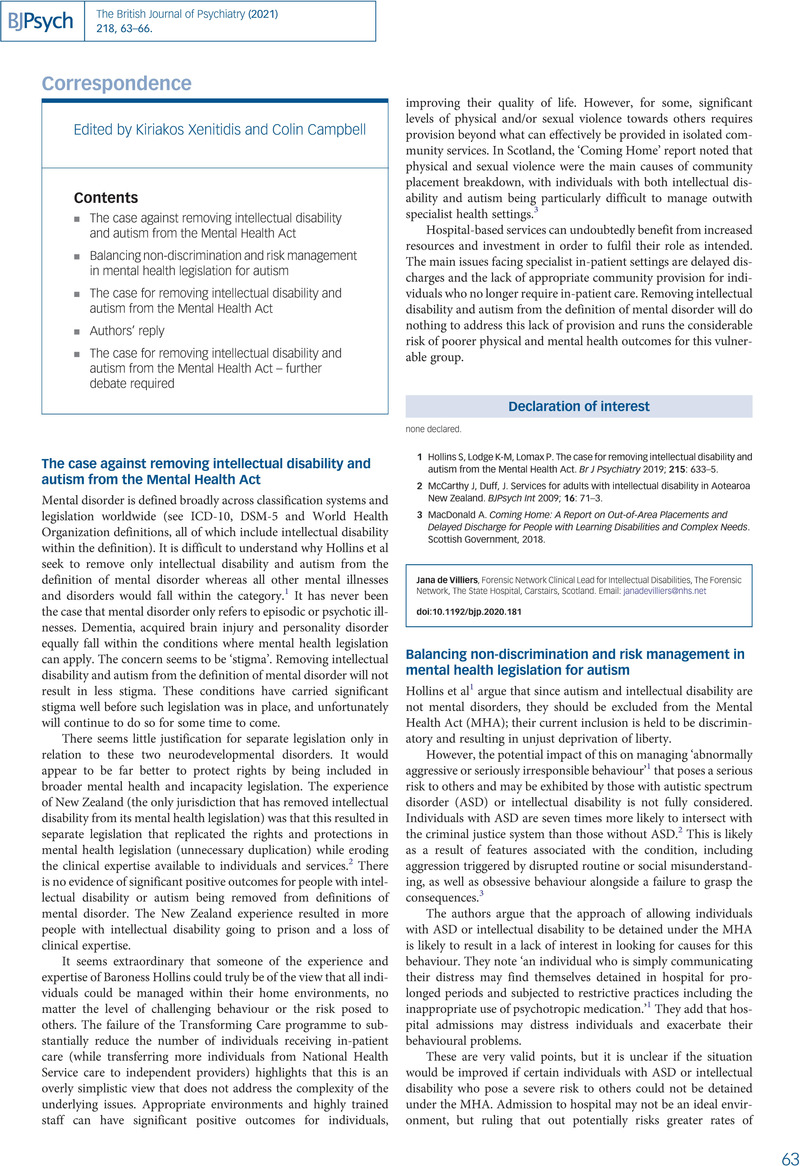 An abstract is not available for this content so a preview has been provided. To view the full text please use the links above to select your preferred format.
Type
Correspondence
Information
The British Journal of Psychiatry , Volume 218 , Issue 1 , January 2021 , pp. 63 - 64
DOI: https://doi.org/10.1192/bjp.2020.182[Opens in a new window]

Hollins et alReference Hollins, Lodge and Lomax1 argue that since autism and intellectual disability are not mental disorders, they should be excluded from the Mental Health Act (MHA); their current inclusion is held to be discriminatory and resulting in unjust deprivation of liberty.

However, the potential impact of this on managing ‘abnormally aggressive or seriously irresponsible behaviour’Reference Hollins, Lodge and Lomax1 that poses a serious risk to others and may be exhibited by those with autistic spectrum disorder (ASD) or intellectual disability is not fully considered. Individuals with ASD are seven times more likely to intersect with the criminal justice system than those without ASD.Reference Berryessa2 This is likely as a result of features associated with the condition, including aggression triggered by disrupted routine or social misunderstanding, as well as obsessive behaviour alongside a failure to grasp the consequences.Reference Chiacchia3

The authors argue that the approach of allowing individuals with ASD or intellectual disability to be detained under the MHA is likely to result in a lack of interest in looking for causes for this behaviour. They note ‘an individual who is simply communicating their distress may find themselves detained in hospital for prolonged periods and subjected to restrictive practices including the inappropriate use of psychotropic medication.’Reference Hollins, Lodge and Lomax1 They add that hospital admissions may distress individuals and exacerbate their behavioural problems.

These are very valid points, but it is unclear if the situation would be improved if certain individuals with ASD or intellectual disability who pose a severe risk to others could not be detained under the MHA. Admission to hospital may not be an ideal environment, but ruling that out potentially risks greater rates of imprisonment. The authors suggest the Mental Capacity Act may provide adequate alternative provision for such individuals – but this leaves them with fewer independent safeguards over detention, treatment and appeal. A ‘fusion’ approach in legislative reform around mental disorders and capacity, similar to that introduced in Northern Ireland,Reference Campbell and Rix4 offers a better framework to safeguard the needs of these individuals in a non-discriminatory manner, while recognising the need to sensitively manage risk to others.