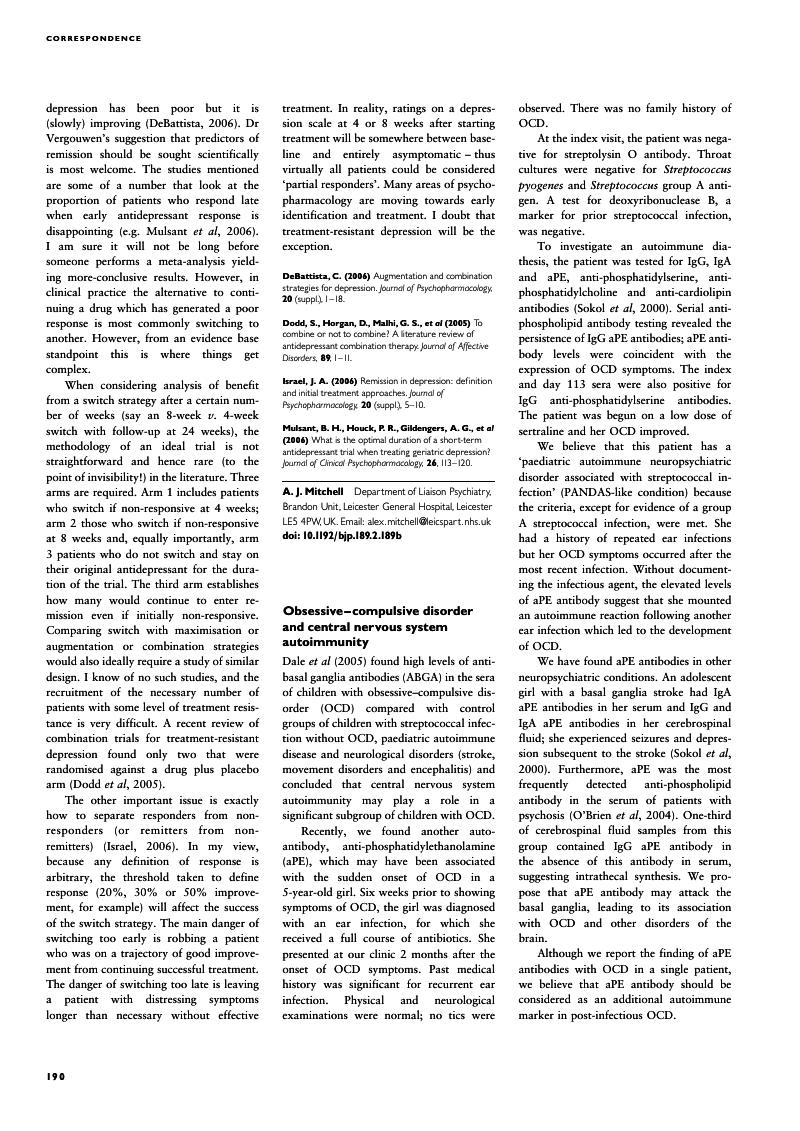 An abstract is not available for this content so a preview has been provided. To view the full text please use the links above to select your preferred format.
Type
Columns
Information
The British Journal of Psychiatry , Volume 189 , Issue 2 , August 2006 , pp. 190 - 191
DOI: https://doi.org/10.1192/bjp.189.2.190[Opens in a new window]
Copyright
Copyright © 2006 The Royal College of Psychiatrists

Dale et al (Reference Dale, Heyman and Giovannoni2005) found high levels of anti-basal ganglia antibodies (ABGA) in the sera of children with obsessive-compulsive disorder (OCD) compared with control groups of children with streptococcal infection without OCD, paediatric autoimmune disease and neurological disorders (stroke, movement disorders and encephalitis) and concluded that central nervous system autoimmunity may play a role in a significant subgroup of children with OCD.

Recently, we found another auto-antibody, anti-phosphatidylethanolamine (aPE), which may have been associated with the sudden onset of OCD in a 5-year-old girl. Six weeks prior to showing symptoms of OCD, the girl was diagnosed with an ear infection, for which she received a full course of antibiotics. She presented at our clinic 2 months after the onset of OCD symptoms. Past medical history was significant for recurrent ear infection. Physical and neurological examinations were normal; no tics were observed. There was no family history of OCD.

We believe that this patient has a ‘paediatric autoimmune neuropsychiatric disorder associated with streptococcal infection’ (PANDAS-like condition) because the criteria, except for evidence of a group A streptococcal infection, were met. She had a history of repeated ear infections but her OCD symptoms occurred after the most recent infection. Without documenting the infectious agent, the elevated levels of aPE antibody suggest that she mounted an autoimmune reaction following another ear infection which led to the development of OCD.

We have found aPE antibodies in other neuropsychiatric conditions. An adolescent girl with a basal ganglia stroke had IgA aPE antibodies in her serum and IgG and IgA aPE antibodies in her cerebrospinal fluid; she experienced seizures and depression subsequent to the stroke (Reference Sokol, McIntyre and ShortSokol et al, 2000). Furthermore, aPE was the most frequently detected anti-phospholipid antibody in the serum of patients with psychosis (Reference O'Brien, Sokol and WagenknechtO'Brien et al, 2004). One-third of cerebrospinal fluid samples from this group contained IgG aPE antibody in the absence of this antibody in serum, suggesting intrathecal synthesis. We propose that aPE antibody may attack the basal ganglia, leading to its association with OCD and other disorders of the brain.

Although we report the finding of aPE antibodies with OCD in a single patient, we believe that aPE antibody should be considered as an additional autoimmune marker in post-infectious OCD.