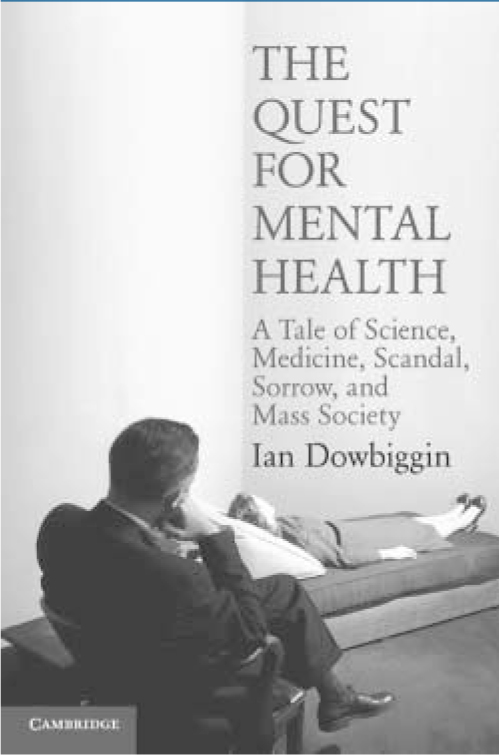 Mental health is a major policy issue in the 21st century. An enormous caring industry has developed to help people with mental health problems. The extent to which these problems are merely everyday life problems and interventions actually undermine self-reliance creates what the author of this book, Ian Dowbiggin, a professor of history at the University of Prince Edward Island, calls ‘therapism’. He suggests the quest for mental health has ‘culminated in a widespread belief that everyone is entitled to mental health, people are sicker than they realise, and government’s mandate is to empower people to enjoy a right to emotional well-being’ (p. 2). His book is a history of psychiatry and beyond from the late 18th century and is said to be an account of how this quest for mental health has produced therapism.

I struggled with this book. Various historical strands are described but they did not form a coherent story that I could easily follow. Readers who know the history of psychiatry will recognise aspects in Dowbiggin’s account but despite my efforts I cannot describe the essence of this book. Ideas are superficially thrown out in what Dowbiggin himself calls the ‘winding road the world has followed since the French Revolution in the populist pursuit of psychological wellness’ (p. 6). I do agree with the author’s belief in the value of a historically grounded approach, but I am afraid he failed to give me much grounding in this subject matter. The social developments he describes progressed chronologically but that was one of the few consistent threads that I could find.

Dowbiggin ends the first and final chapters with a quote from Alexis de Tocqueville. In the last few lines of Democracy in America de Tocqueville wrote: ‘The nations of our day cannot prevent conditions of equality from spreading in their midst. But it depends upon themselves whether equality is to lead to servitude or freedom, knowledge or barbarism, prosperity or wretchedness.’ I think Dowbiggin is trying to steer us to freedom, knowledge and prosperity in mental health. Certainly he has described some of the servitude, barbarism and wretchedness of this pursuit. State management of mental health is what created the asylums and continues to be a major endeavour that needs to be understood historically.