The Yellow Wallpaper by Charlotte Perkins Gilman: a gothic story of postnatal psychosis – psychiatry in literature 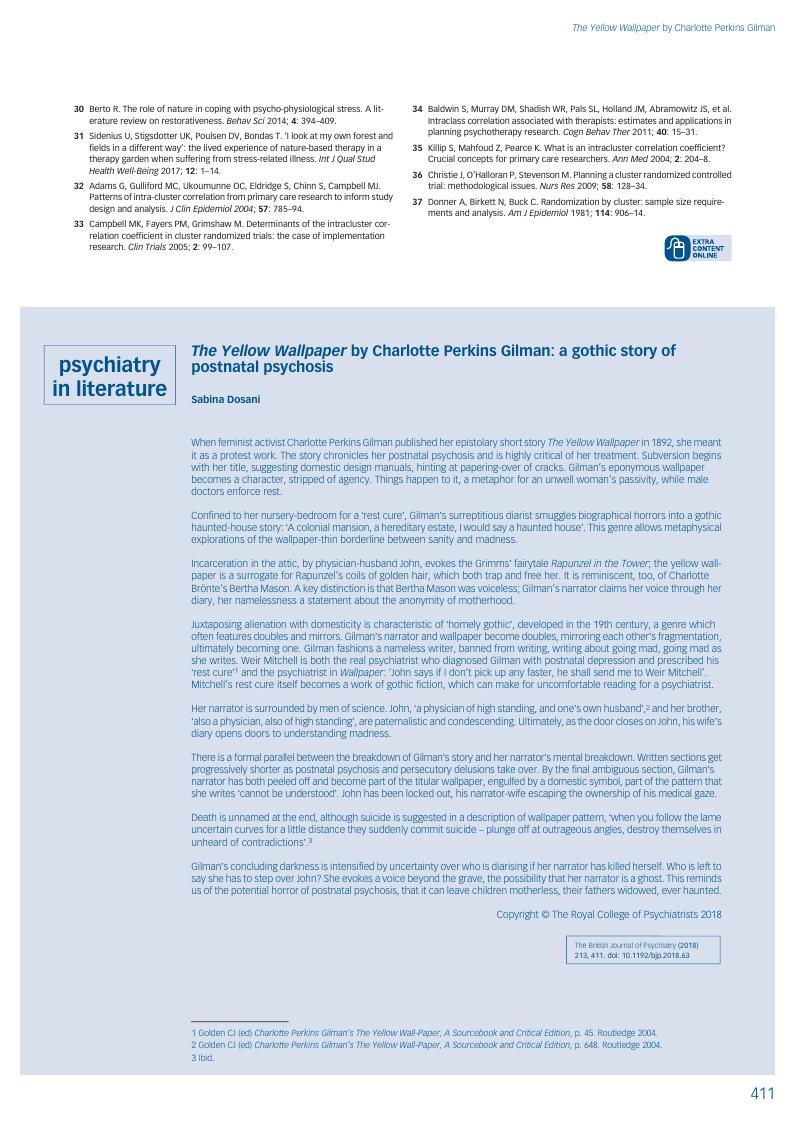 An abstract is not available for this content so a preview has been provided. To view the full text please use the links above to select your preferred format.
Type
Extras
Information
The British Journal of Psychiatry , Volume 213 , Issue 1 , July 2018 , pp. 411
DOI: https://doi.org/10.1192/bjp.2018.63[Opens in a new window]
Copyright
Copyright © The Royal College of Psychiatrists 2018

When feminist activist Charlotte Perkins Gilman published her epistolary short story The Yellow Wallpaper in 1892, she meant it as a protest work. The story chronicles her postnatal psychosis and is highly critical of her treatment. Subversion begins with her title, suggesting domestic design manuals, hinting at papering-over of cracks. Gilman's eponymous wallpaper becomes a character, stripped of agency. Things happen to it, a metaphor for an unwell woman's passivity, while male doctors enforce rest.

Confined to her nursery-bedroom for a ‘rest cure’, Gilman's surreptitious diarist smuggles biographical horrors into a gothic haunted-house story: ‘A colonial mansion, a hereditary estate, I would say a haunted house’. This genre allows metaphysical explorations of the wallpaper-thin borderline between sanity and madness.

Incarceration in the attic, by physician-husband John, evokes the Grimms' fairytale Rapunzel in the Tower; the yellow wallpaper is a surrogate for Rapunzel's coils of golden hair, which both trap and free her. It is reminiscent, too, of Charlotte Brönte's Bertha Mason. A key distinction is that Bertha Mason was voiceless; Gilman's narrator claims her voice through her diary, her namelessness a statement about the anonymity of motherhood.

Juxtaposing alienation with domesticity is characteristic of ‘homely gothic’, developed in the 19th century, a genre which often features doubles and mirrors. Gilman's narrator and wallpaper become doubles, mirroring each other's fragmentation, ultimately becoming one. Gilman fashions a nameless writer, banned from writing, writing about going mad, going mad as she writes. Weir Mitchell is both the real psychiatrist who diagnosed Gilman with postnatal depression and prescribed his ‘rest cure’Footnote 1 and the psychiatrist in Wallpaper: ‘John says if I don't pick up any faster, he shall send me to Weir Mitchell’. Mitchell's rest cure itself becomes a work of gothic fiction, which can make for uncomfortable reading for a psychiatrist.

Her narrator is surrounded by men of science. John, ‘a physician of high standing, and one's own husband’,Footnote 2 and her brother, ‘also a physician, also of high standing’, are paternalistic and condescending. Ultimately, as the door closes on John, his wife's diary opens doors to understanding madness.

There is a formal parallel between the breakdown of Gilman's story and her narrator's mental breakdown. Written sections get progressively shorter as postnatal psychosis and persecutory delusions take over. By the final ambiguous section, Gilman's narrator has both peeled off and become part of the titular wallpaper, engulfed by a domestic symbol, part of the pattern that she writes ‘cannot be understood’. John has been locked out, his narrator-wife escaping the ownership of his medical gaze.

Death is unnamed at the end, although suicide is suggested in a description of wallpaper pattern, ‘when you follow the lame uncertain curves for a little distance they suddenly commit suicide – plunge off at outrageous angles, destroy themselves in unheard of contradictions’.Footnote 3

Gilman's concluding darkness is intensified by uncertainty over who is diarising if her narrator has killed herself. Who is left to say she has to step over John? She evokes a voice beyond the grave, the possibility that her narrator is a ghost. This reminds us of the potential horror of postnatal psychosis, that it can leave children motherless, their fathers widowed, ever haunted.

The Yellow Wallpaper by Charlotte Perkins Gilman: a gothic story of postnatal psychosis – psychiatry in literature
×

The Yellow Wallpaper by Charlotte Perkins Gilman: a gothic story of postnatal psychosis – psychiatry in literature
×

The Yellow Wallpaper by Charlotte Perkins Gilman: a gothic story of postnatal psychosis – psychiatry in literature
×
×