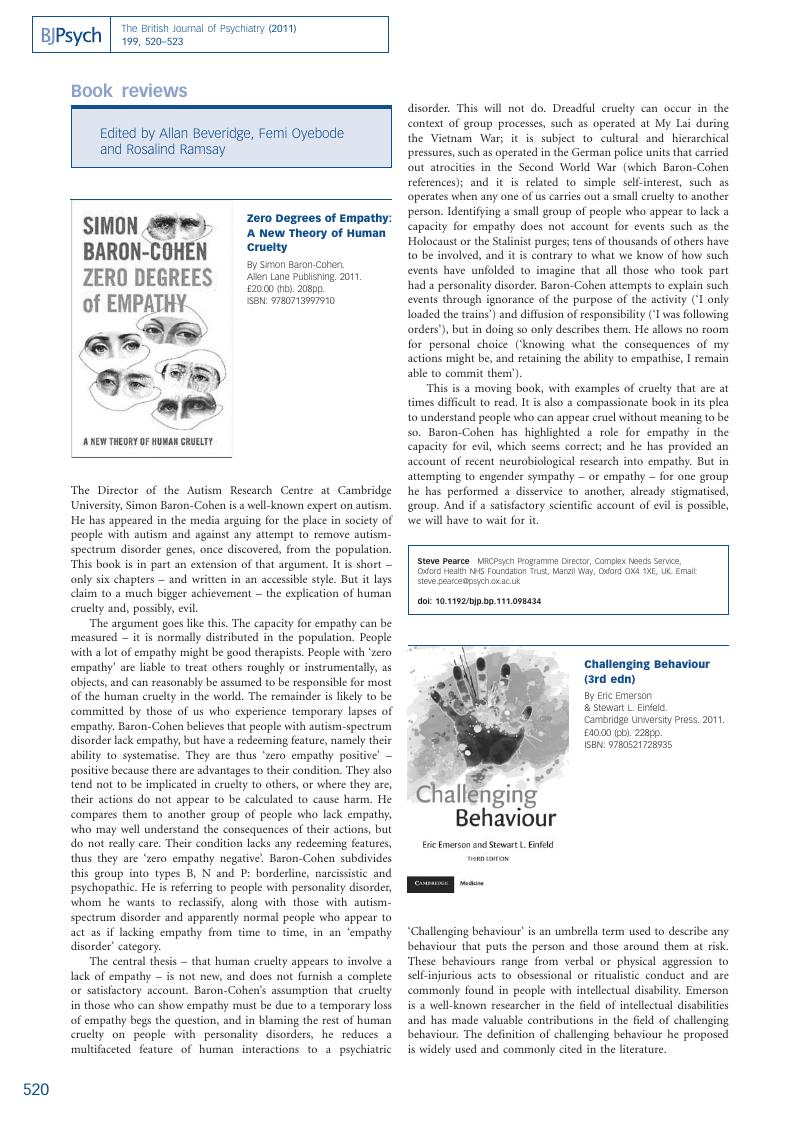 An abstract is not available for this content so a preview has been provided. To view the full text please use the links above to select your preferred format.
Type
Columns
Information
The British Journal of Psychiatry , Volume 199 , Issue 6 , December 2011 , pp. 520
DOI: https://doi.org/10.1192/bjp.bp.111.098434[Opens in a new window]
Copyright
Copyright © Royal College of Psychiatrists, 2011 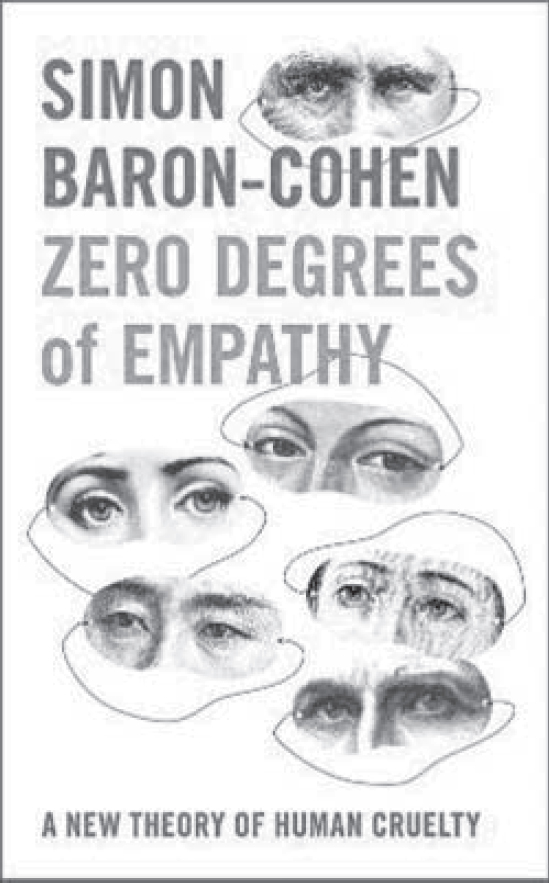 The Director of the Autism Research Centre at Cambridge University, Simon Baron-Cohen is a well-known expert on autism. He has appeared in the media arguing for the place in society of people with autism and against any attempt to remove autism-spectrum disorder genes, once discovered, from the population. This book is in part an extension of that argument. It is short – only six chapters – and written in an accessible style. But it lays claim to a much bigger achievement – the explication of human cruelty and, possibly, evil.

The argument goes like this. The capacity for empathy can be measured – it is normally distributed in the population. People with a lot of empathy might be good therapists. People with ‘zero empathy’ are liable to treat others roughly or instrumentally, as objects, and can reasonably be assumed to be responsible for most of the human cruelty in the world. The remainder is likely to be committed by those of us who experience temporary lapses of empathy. Baron-Cohen believes that people with autism-spectrum disorder lack empathy, but have a redeeming feature, namely their ability to systematise. They are thus ‘zero empathy positive’ – positive because there are advantages to their condition. They also tend not to be implicated in cruelty to others, or where they are, their actions do not appear to be calculated to cause harm. He compares them to another group of people who lack empathy, who may well understand the consequences of their actions, but do not really care. Their condition lacks any redeeming features, thus they are ‘zero empathy negative’. Baron-Cohen subdivides this group into types B, N and P: borderline, narcissistic and psychopathic. He is referring to people with personality disorder, whom he wants to reclassify, along with those with autism-spectrum disorder and apparently normal people who appear to act as if lacking empathy from time to time, in an ‘empathy disorder’ category.

The central thesis – that human cruelty appears to involve a lack of empathy – is not new, and does not furnish a complete or satisfactory account. Baron-Cohen’s assumption that cruelty in those who can show empathy must be due to a temporary loss of empathy begs the question, and in blaming the rest of human cruelty on people with personality disorders, he reduces a multifaceted feature of human interactions to a psychiatric disorder. This will not do. Dreadful cruelty can occur in the context of group processes, such as operated at My Lai during the Vietnam War; it is subject to cultural and hierarchical pressures, such as operated in the German police units that carried out atrocities in the Second World War (which Baron-Cohen references); and it is related to simple self-interest, such as operates when any one of us carries out a small cruelty to another person. Identifying a small group of people who appear to lack a capacity for empathy does not account for events such as the Holocaust or the Stalinist purges; tens of thousands of others have to be involved, and it is contrary to what we know of how such events have unfolded to imagine that all those who took part had a personality disorder. Baron-Cohen attempts to explain such events through ignorance of the purpose of the activity (‘I only loaded the trains’) and diffusion of responsibility (‘I was following orders’), but in doing so only describes them. He allows no room for personal choice (‘knowing what the consequences of my actions might be, and retaining the ability to empathise, I remain able to commit them’).

This is a moving book, with examples of cruelty that are at times difficult to read. It is also a compassionate book in its plea to understand people who can appear cruel without meaning to be so. Baron-Cohen has highlighted a role for empathy in the capacity for evil, which seems correct; and he has provided an account of recent neurobiological research into empathy. But in attempting to engender sympathy – or empathy – for one group he has performed a disservice to another, already stigmatised, group. And if a satisfactory scientific account of evil is possible, we will have to wait for it.