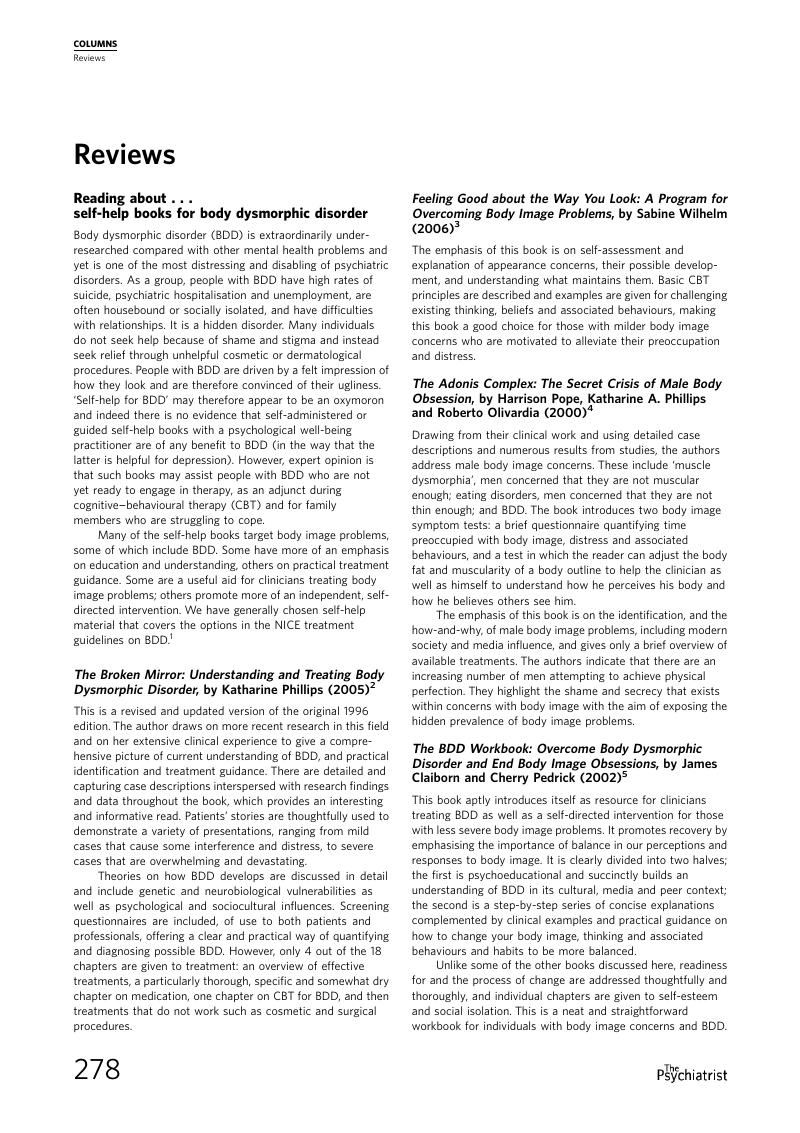 An abstract is not available for this content so a preview has been provided. To view the full text please use the links above to select your preferred format.
Type
Columns
Information
The Psychiatrist , Volume 36 , Issue 7 , July 2012 , pp. 278
DOI: https://doi.org/10.1192/pb.bp.111.035816[Opens in a new window]
Creative Commons
This is an Open Access article, distributed under the terms of the Creative Commons Attribution (CC-BY) license (http://creativecommons.org/licenses/by/4.0/), which permits unrestricted re-use, distribution, and reproduction in any medium, provided the original work is properly cited.
Copyright
Copyright © Royal College of Psychiatrists, 2012

Body dysmorphic disorder (BDD) is extraordinarily under-researched compared with other mental health problems and yet is one of the most distressing and disabling of psychiatric disorders. As a group, people with BDD have high rates of suicide, psychiatric hospitalisation and unemployment, are often housebound or socially isolated, and have difficulties with relationships. It is a hidden disorder. Many individuals do not seek help because of shame and stigma and instead seek relief through unhelpful cosmetic or dermatological procedures. People with BDD are driven by a felt impression of how they look and are therefore convinced of their ugliness. ‘Self-help for BDD’ may therefore appear to be an oxymoron and indeed there is no evidence that self-administered or guided self-help books with a psychological well-being practitioner are of any benefit to BDD (in the way that the latter is helpful for depression). However, expert opinion is that such books may assist people with BDD who are not yet ready to engage in therapy, as an adjunct during cognitive-behavioural therapy (CBT) and for family members who are struggling to cope.

Many of the self-help books target body image problems, some of which include BDD. Some have more of an emphasis on education and understanding, others on practical treatment guidance. Some are a useful aid for clinicians treating body image problems; others promote more of an independent, self-directed intervention. We have generally chosen self-help material that covers the options in the NICE treatment guidelines on BDD. 1

This is a revised and updated version of the original 1996 edition. The author draws on more recent research in this field and on her extensive clinical experience to give a comprehensive picture of current understanding of BDD, and practical identification and treatment guidance. There are detailed and capturing case descriptions interspersed with research findings and data throughout the book, which provides an interesting and informative read. Patients’ stories are thoughtfully used to demonstrate a variety of presentations, ranging from mild cases that cause some interference and distress, to severe cases that are overwhelming and devastating.

Theories on how BDD develops are discussed in detail and include genetic and neurobiological vulnerabilities as well as psychological and sociocultural influences. Screening questionnaires are included, of use to both patients and professionals, offering a clear and practical way of quantifying and diagnosing possible BDD. However, only 4 out of the 18 chapters are given to treatment: an overview of effective treatments, a particularly thorough, specific and somewhat dry chapter on medication, one chapter on CBT for BDD, and then treatments that do not work such as cosmetic and surgical procedures.

Feeling Good about the Way You Look: A Program for Overcoming Body Image Problems, by Sabine Wilhelm (2006)Reference Wilhelm 3

The emphasis of this book is on self-assessment and explanation of appearance concerns, their possible development, and understanding what maintains them. Basic CBT principles are described and examples are given for challenging existing thinking, beliefs and associated behaviours, making this book a good choice for those with milder body image concerns who are motivated to alleviate their preoccupation and distress.

Drawing from their clinical work and using detailed case descriptions and numerous results from studies, the authors address male body image concerns. These include ‘muscle dysmorphia’, men concerned that they are not muscular enough; eating disorders, men concerned that they are not thin enough; and BDD. The book introduces two body image symptom tests: a brief questionnaire quantifying time preoccupied with body image, distress and associated behaviours, and a test in which the reader can adjust the body fat and muscularity of a body outline to help the clinician as well as himself to understand how he perceives his body and how he believes others see him.

The emphasis of this book is on the identification, and the how-and-why, of male body image problems, including modern society and media influence, and gives only a brief overview of available treatments. The authors indicate that there are an increasing number of men attempting to achieve physical perfection. They highlight the shame and secrecy that exists within concerns with body image with the aim of exposing the hidden prevalence of body image problems.

This book aptly introduces itself as resource for clinicians treating BDD as well as a self-directed intervention for those with less severe body image problems. It promotes recovery by emphasising the importance of balance in our perceptions and responses to body image. It is clearly divided into two halves; the first is psychoeducational and succinctly builds an understanding of BDD in its cultural, media and peer context; the second is a step-by-step series of concise explanations complemented by clinical examples and practical guidance on how to change your body image, thinking and associated behaviours and habits to be more balanced.

Unlike some of the other books discussed here, readiness for and the process of change are addressed thoughtfully and thoroughly, and individual chapters are given to self-esteem and social isolation. This is a neat and straightforward workbook for individuals with body image concerns and BDD.

The Body Image Workbook: An Eight-Step Program for Learning to Like Your Looks, by Thomas F. Cash (1997)Reference Cash 6

This book accessibly navigates the reader towards changing their relationship with their body through eight clearly defined steps. It is a structured combination of theory, research and clinical examples and from the outset is hopeful, considered and empathetic. Cash competently imparts knowledge and skills to the individual, with the intention of promoting autonomy and empowerment in a sensitive manner. He encourages action and progress through the tone of the book as well as practical goal and summary sheets at the end of each step. The book is not specific to BDD but for body image problems in general. It is skilfully written and a useful tool, with over 40 help sheets suitable for use by an individual or for a clinician as an adjunct to therapy.

As implied by the title, this book provides a step-by-step, self-help guide to understanding and treating body image problems using cognitive-behavioural techniques. It follows a current evidence-based treatment manual Reference Veale and Neziroglu8 directed to the patient, based on how a clinician should provide CBT for a person with body image concerns.

Post-introductions, there is a single chapter with screening questions given to identifying the presence of a body image problem. The remaining thirteen chapters are a concise combination of information and actions directed to the patient and designed to develop their own understanding, formulation and treatment of BDD. It is punctuated throughout with practical exercises, worksheets, common examples, and skills training techniques.

The reader is guided, via an easy-to-read manual, through how to apply the cognitive-behavioural techniques. The tone of the book from the outset is positive, proactive and hopeful.

Self-help guided by charities and websites

There are various virtual support groups where people with BDD and their carers are likely to get a lot of information from.