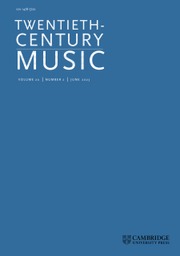 Although Uri Caine first made his mark as a relatively straight-ahead jazz pianist – ‘roots’ to which he returns regularly – he has, arguably, become most famous with his often controversial versions of works from the ‘classical music’ canon. These recompositions, which often involve a host of other styles from Latin to dub, are usually regarded as examples of postmodern eclecticism. While this view is certainly valid, it needs to be complemented by more detailed analysis of both Caine’s artistic methods and their aesthetic and ideological implications. Among his work on classical composers, Caine’s engagement with Gustav Mahler is the most sustained. The result of this engagement is not an exercise in ‘crossover’ or ‘jazzed-up’ Mahler, but a radical reinterpretation of Mahler’s music that situates it as a Jewish voice within the cultural cross-currents of fin-de-siècle Central Europe. Through this reference to Mahler, Caine constructs a Jewish tradition within jazz that complements but does not compete with jazz’s overwhelmingly African-American heritage. What emerges is a pluralistic subjectivity in which different cultural identities and traditions are negotiated in an equal and open dialogue.