from Part III - Theory of foraging

from Part I - Introduction: Movement

from Part III - Theory of foraging 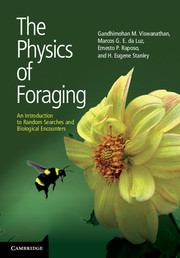