from 4 - A History of Programming and Music

from 9 - Electronic Music and the Moving Image

from 15 - The Analysis of Electronic Music 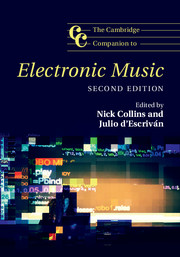