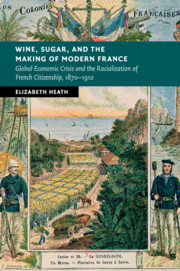 Wine, Sugar, and the Making of Modern France
Global Economic Crisis and the Racialization of French Citizenship, 1870–1910