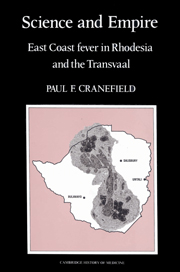 Science and Empire
East Coast Fever in Rhodesia and the Transvaal