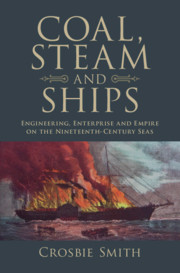 Coal, Steam and Ships
Engineering, Enterprise and Empire on the Nineteenth-Century Seas