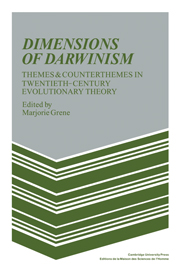 Dimensions of Darwinism
Themes and Counterthemes in Twentieth-Century Evolutionary Theory