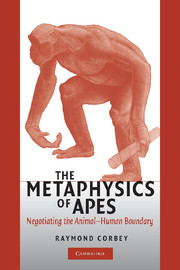 The Metaphysics of Apes
Negotiating the Animal-Human Boundary