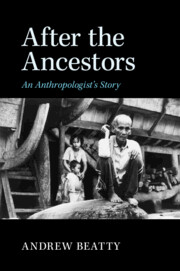 After the Ancestors
An Anthropologist's Story

After the Ancestors: An Anthropologist's Story

An Interview with Andrew Beatty