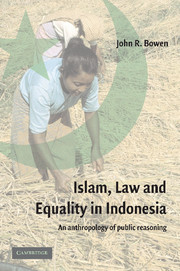 Islam, Law, and Equality in Indonesia
An Anthropology of Public Reasoning