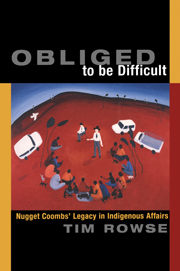 Obliged to be Difficult
Nugget Coombs' Legacy in Indigenous Affairs