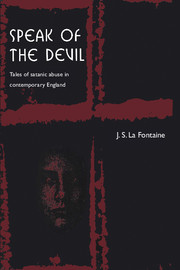 Speak of the Devil
Tales of Satanic Abuse in Contemporary England