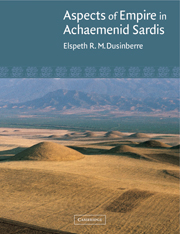 Aspects of Empire in Achaemenid Sardis