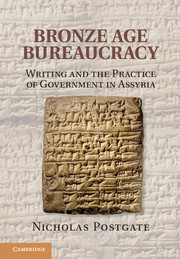 Bronze Age Bureaucracy
Writing and the Practice of Government in Assyria