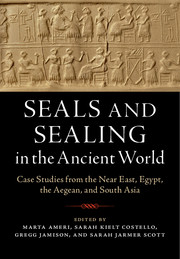 Seals and Sealing in the Ancient World
Case Studies from the Near East, Egypt, the Aegean, and South Asia