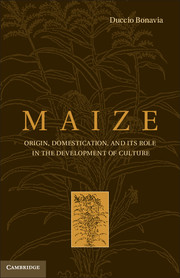 Maize
Origin, Domestication, and its Role in the Development of Culture