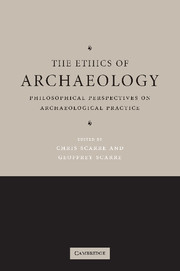 The Ethics of Archaeology
Philosophical Perspectives on Archaeological Practice