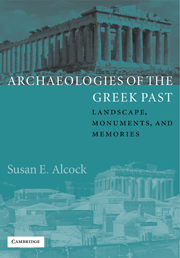 Archaeologies of the Greek Past
Landscape, Monuments, and Memories