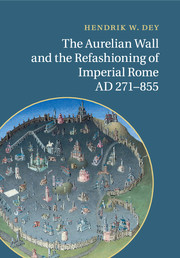 The Aurelian Wall and the Refashioning of Imperial Rome, AD 271–855