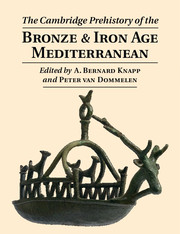 The Cambridge Prehistory of the Bronze and Iron Age Mediterranean