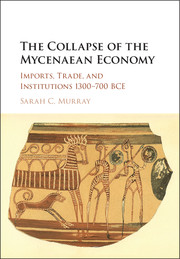 The Collapse of the Mycenaean Economy
Imports, Trade, and Institutions 1300–700 BCE