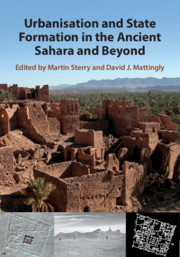 Urbanisation and State Formation in the Ancient Sahara and Beyond