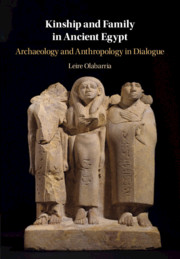 Kinship and Family in Ancient Egypt
Archaeology and Anthropology in Dialogue