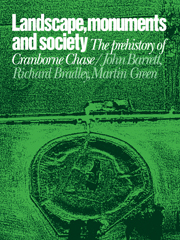 Landscape, Monuments and Society
The Prehistory of Cranborne Chase