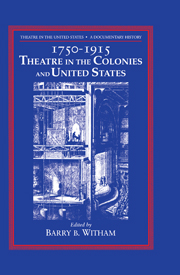 Theatre in the United States
A Documentary History

Part of Theatre in the United States