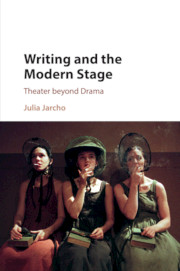 Writing and the Modern Stage
Theater beyond Drama