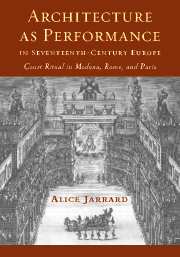 Architecture as Performance in Seventeenth-Century Europe
Court Ritual in Modena, Rome, and Paris