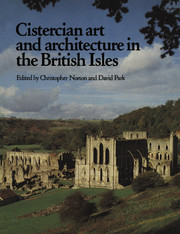 Cistercian Art and Architecture in the British Isles