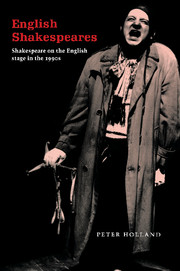 English Shakespeares
Shakespeare on the English Stage in the 1990s