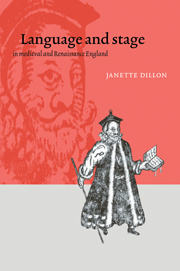 Language and Stage in Medieval and Renaissance England