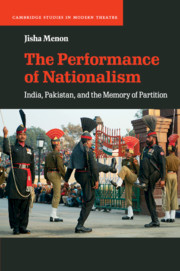 The Performance of Nationalism
India, Pakistan, and the Memory of Partition